The Government’s Breach of Trust 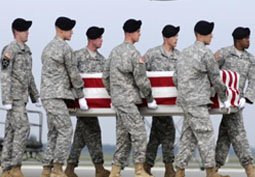 While the military managed to dodge a bullet by remaining operational amidst the current governmental shutdown with the “Pay Our Military Act,” military families and the military community overall isn’t feeling the confidence.

If the chaos of the shutdown doesn’t come to an end soon, the U.S. Department of Veterans Affairs (VA) can’t guarantee that November beneficiary checks will be dispensed to well over 3 million veterans. The VA has furloughed nearly 8,000 workers, many of whom are veterans. This information came to light when Veterans Affairs Secretary Eric Shinseki spoke to the House Veterans’ Affairs Committee, claiming that the shutdown is leading to massive setbacks for the VA.

Another effect that recently outraged the military community involves the military death benefit. After receiving an infuriated response, lawmakers almost immediately backpedaled on their decision.

The brave and dedicated service members who put their lives on the line for the United States shouldn’t have to feel the stress that their family will be put in financial jeopardy should they lose their lives on the job. This shameful and outrageous decision has caused many active and potential service members to question their trust in a country whose leadership appears to be turning their back on them.

And of course, there’s a great deal of red tape to resolve this problem. Once approved by the House and Senate, the resumption of financial assistance to families of service members killed in combat must be approved by the President (who is, to his credit, encouraging congress’ hasty resolution in passing a solution).

There is still an excess of finger-pointing and debate as to whether death gratuity was included within the “Pay Our Military Act.” This is a breach of ethics within our government that can’t be ignored; benefits for families of fallen service members shouldn’t be an option for the government.

Logic would suggest that this would be a wake-up call for the ‘leaders’ of our government to end this madness and begin working together to find a meaningful solution to the shutdown. The effects of this power struggle within Congress are causing lasting pain to millions of Americans, many of whom are keeping us safe, and receiving disrespect in return.

What are your feelings on the shutdown’s effect on the military?