The Face of Sequestration 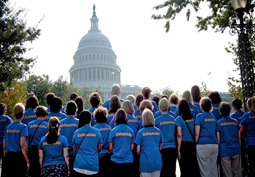 With budget battles picking up in Congress this month, the National Military Family Association took to the Hill recently to push legislators to end sequestration. The effort gave members a chance to directly interact with congressional offices.

Unified in message, the nearly four dozen blue shirts all said one thing on the back: #EndSequestration.

When military spouses and veterans stormed Congress last week, the goal was to draw attention to the effects sequestration is having on military families. But the effort, led by the National Military Family Association (NMFA), also proved an effective way to get members directly involved in advocacy issues. More details:

Last Thursday, a group of military spouses and veterans, representing a wide variety of military support groups (which, beyond NMFA, included MilitaryOneClick, Macho Spouse, the Military Partners and Families Coalition,Military Spouse magazine, and Spouse Buzz), stormed Capitol Hill to raise awareness about the struggles military families face because of sequestration. The association members brought examples of how the mandatory, across-the-board spending cuts directly and indirectly affected them, both in the form of a book, titled The Yellow Ribbon Is Unraveling: Military Families Share the Pain of Sequestration [PDF], and in the form of anecdotes shared by members. Those who took part visited the offices of all 535 members of Congress.

In a press release, NMFA Executive Director Joyce Raezer suggested that further sequestration cuts at the Department of Defense could hurt families even more. “This summer’s disruptive furloughs only saved $1 billion,” she stated. “Next year, DoD will have to find $52 billion in savings if sequestration continues. How much more pain will that bring?” While the direct approach is unusual, Raezer toldMilitary.com, the seriousness of the situation warranted the direct door-knocking—something the group is open to doing again, if necessary.

The value for members

For those who were able to take part, the value came in the form of direct advocacy and interaction. This was something underlined by DC Military Living Blogger Alice Swan, who wrote about taking part in the campaign in a post last Friday. “The lesson this first time activist learned: we all have the [c]onstitutional right to petition government for redress of grievances and we can’t be afraid to exercise that right,” she wrote. “It was a tremendous civics lesson to see that every citizen can go directly to their representative’s office in order to be heard. It helps if you are a constituent. Staffers may be the people you talk to, but at least it is a foot in the door.”

Beyond the in-person efforts, the organization also has been active on social media regarding sequestration spending cuts,with Raezer herself playing a role.