The Effects of ADHD for Kids and Parents 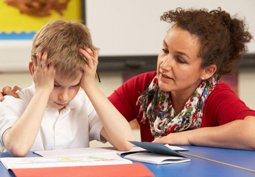 In a study just released in the journal Pediatrics, nearly a third of a group of adults who had ADHD (Attention Deficit Hyperactivity Disorder) in childhood still had it as adults. A third. That’s a lot of people to still be struggling with concentration and learning, still have trouble with impulse control, still have problems interacting with others–while they are trying to make a living, and possibly raising a family too.

But here’s where it gets worse. The majority (56.9 percent) of the adults who had ADHD as children, whether or not they still had it, had at least one psychiatric diagnosis. The most common one was alcohol dependence or abuse, which was followed by antisocial personality disorder, other substance abuse disorders, hypomania, anxiety and depression.

And there was more: compared with the control group in the study, adults who had childhood ADHD were twice as likely to have considered or attempted suicide by age 21.

Considering that ADHD is the most common neurodevelopmental disorder of childhood, affecting at least 3 to 7 percent of school-age children in the United States, this is scary stuff.

The authors of the study (including Dr. Barbaresi from Boston Children’s Hospital, where I work) say that we need to stop thinking of ADHD as just a childhood learning and behavior problem, and start thinking of it as a chronic disease. They are right; like diabetes, ADHD clearly has effects that can be very serious–and last a lifetime.

It’s going to take a while for the medical profession to wrap their minds around this, I think. I mean, it’s not that hard to understand intellectually–but putting the needed evaluations, supports and treatments into place will be harder. Not impossible–and actually, thinking of it as a chronic disease helps, because it gives us models to follow–but harder.

In the meantime, I think it’s going to be up to the parents–and doctors and teachers and counselors–of kids with ADHD to really advocate for them. Every kid with ADHD should have:

To learn more, check out the CDC’s ADHD page, or the website of CHADD, Children and Adults with Attention Deficit Disorder.