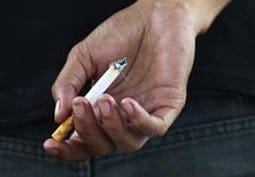 (Reuters Health) – Teenagers who smoke are more likely to die of heart disease decades down the line, even if they quit by the time they’re middle-aged, researchers have found.

Still, the worst off were people who started smoking in adolescence and kept up the habit their entire lives. They were twice as likely to die early as were non-smokers, according to findings published in the Journal of the American College of Cardiology.

“The risks are cumulative,” said David Batty, who worked on the new study at University College London. “If you smoke across a life course, you’re at much higher risk than if you just smoked around the college years,” he told Reuters Health.

“The positive message is, it’s never too late to stop.”

Past research has linked early smoking to future heart disease and cancer. But those studies relied on middle-aged people remembering if and how much they smoked when they were younger – which isn’t always a reliable technique, researchers said.

Instead, Batty and his colleagues used data from an ongoing study of men who started college at Harvard University in Cambridge, Massachusetts between 1916 and 1950 and reported their cigarette use on school health exams.

The new study included over 28,000 men, about 10,000 of whom reported smoking as undergrads. Almost half of the participants died during an average follow-up of 53 years.

Men who reported smoking on both their college physical and follow-up questionnaires were twice as likely to die as those who never smoked. In comparison, Harvard alums who smoked as teenagers but then quit were at a 29-percent increased risk of early death.

Risks were higher for smoking-related cancers and heart disease, in particular.

“The good news is, for people who are able to quit, this is going to have profound effects on their health,” said Dr. Michael Siegel, a tobacco control researcher from the Boston University School of Public Health.

“For people who did quit smoking during the follow-up period, their risk of death dropped greatly. It doesn’t quite go back to (non-smokers’ risk), but it is significantly less,” Siegel, who wasn’t involved in the new research, told Reuters Health.

But, he added, the study also “shows the tremendous negative consequences if we don’t get people to quit.”

“We can’t lose sight of all the current smokers out there and the fact that smoking cessation rates are really very low,” he said. About three percent of smokers quit every year, Siegel said.