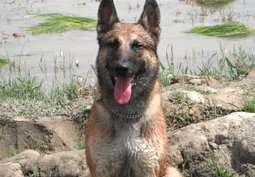 We are in love with Kevin Hanrahan! We’ve been following his work for a while now and think he is an amazing guy. Kevin is the author of the novel in manuscript, Paws on the Ground, a novel about  U.S. Soldiers and the dogs that protect them in the treacherous terrain of Afghanistan. The novel is based on Hanrahan’s 20 years of Army service, his experiences as a company commander in Iraq and his experience as the Deputy Provost Marshal for U.S. forces in Afghanistan. While in Afghanistan, Hanrahan was instrumental in spearheading the surge of dogs into Afghanistan and lobbied the Army to adopt an innovative and life saving explosive detecting dog program. Kevin has served three combat tours and was awarded two Bronze Stars and an Army Commendation Medal for Valor.  He currently resides in Poquoson, Va, with his wife Megan, son Brady and their two dogs, Sammy and Stella. His website provides great blogs for those in the Military as well as anyone interested in learning about and supporting Working Dogs. We encourage you to check him out! Read his story “John and the Lumbering Honza Bear” Check out the website Follow on Twitter Like on Facebook