Suicides in Military Rise, Even as Combat Lessens 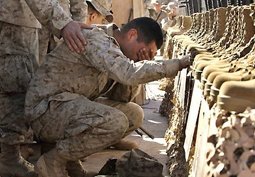 For U.S. troops, less combat is not translating to less stress. Members of the military committed suicide at a record pace in 2012 — almost one per day — and some experts think the trend will grow worse this year.

Pentagon figures obtained Monday by The Associated Press show 349 suicides among active-duty troops last year, up from 301 the year before and exceeding the Pentagon’s own internal projection of 325.

Last year’s total is the highest since the Pentagon began closely tracking suicides in 2001. It exceeds the 295 Americans who died in Afghanistan last year, by the AP’s count.

The Pentagon has struggled to deal with suicides, which Defense Secretary Leon Panetta and others have called an epidemic. The problem reflects severe strains on military personnel burdened with more than a decade of combat in Afghanistan and Iraq, and is increasingly complicated by anxiety over the prospect of being forced out of uniform as defense budgets are cut.

“Now that we’re decreasing our troops and they’re coming back home, that’s when they’re really in the danger zone, when they’re transitioning back to their families, back to their communities and really finding a sense of purpose for themselves,” said Kim Ruocco, whose husband, Marine Maj. John Ruocco, killed himself in 2005. She directs a suicide prevention program for a support group, Tragedy Assistance Program for Survivors, or TAPS.

One such case was Army Spc. Christopher Nguyen, 29, who killed himself in August at an off-post residence he shared with another member of the 82nd Airborne Division at Fort Bragg, N.C., according to his sister, Shawna Nguyen.

“He was practically begging for help, and nothing was done,” she said in an interview.

She said he had been diagnosed with an “adjustment disorder” — a problem of coping with the uncertainties of returning home after three deployments in war zones. She believes the Army failed her brother by not doing more to ensure that he received the help he needed before he became suicidal.

“It’s the responsibility of the military to help these men and women,” she said. “They sent them over there (to war); they should be helping them when they come back.”

David Rudd, a military suicide researcher and dean of the College of Social and Behavioral Sciences at the University of Utah, said he sees two main categories of troops who are committing suicide at an accelerating pace: Iraq and Afghanistan war veterans suffering from depression, post-traumatic stress or substance abuse and those who have not gone to war but face troubled personal relationships, money problems or legal woes.

He is not optimistic about a decline soon.

“Actually, we may continue to see increases,” he said, since the military is headed for major personnel cuts as budgets shrink. Fear of being compelled to return to civilian society is especially stressful for people whose identity and self-esteem is closely tied to their role in the military, Rudd said.

Military suicides began rising in 2006 and soared to a then-record 310 in 2009 before leveling off for two years.

Officials say they are committed to pursuing ways of finding help for service members in trouble.

“Our most valuable resource within the department is our people. We are committed to taking care of our people and that includes doing everything possible to prevent suicides in the military,” Pentagon spokeswoman Cynthia O. Smith said Monday.

The Army, by far the largest of the military services, had the highest number of suicides among active-duty troops last year at 182, but the Marine Corps, whose suicide numbers had declined for two years, had the largest percentage increase — a 50 percent jump to 48. The Marines’ worst year was 2009’s 52 suicides.

The Air Force recorded 59 suicides, up 16 percent from the previous year, and the Navy had 60, up 15 percent.

All the numbers are tentative, pending the completion later this year of formal pathology reports on each case.

Suicide prevention has become a high Pentagon priority, yet the problem persists.

“If you have a perfect storm of events on the day with somebody who has high risk factors, it’s very difficult to be there every moment, fill every crack, and we just have to continue to be aware of what the risk factors are,” Ruocco said.

Two retired Army generals, Peter W. Chiarelli and Dennis J. Reimer, have spoken out about the urgency of reversing the trend.

“One of the things we learned during our careers,” they wrote in The Washington Post last month, “is that stress, guns and alcohol constitute a dangerous mixture. In the wrong proportions, they tend to blow out the lamp of the mind and cause irrational acts.”

Each year the Pentagon performs an in-depth study of the circumstances of each suicide. The most recent year for which that analysis is available is 2011, and among the findings was that those who took their own lives tended to be white men under the age of 25, in the junior enlisted ranks, with less than a college education.

That study also found that most service members who attempted suicide — about 65 percent — had a known behavior disorder such as depression, whereas 45 percent of those who actually completed the act and killed themselves had such a history.

The Defense Department provides veterans in crisis with a toll-free number, 800-273-8255, for assistance.