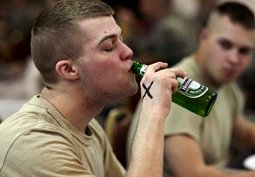 WASHINGTON – Abusing alcohol and drugs has been part of military culture historically: Troops do it for fun, to ease the stresses of war or to be part of the brotherhood.

But a new report says substance use and misuse among troops and their families has become a “public health crisis” and says Pentagon methods for dealing with it are out of date.

In a study requested by the Defense Department, the Institute of Medicine report Monday said:

“Better care for service members and their families is hampered by inadequate prevention strategies, staffing shortages, lack of coverage for services that are proved to work, and stigma associated with these disorders,” said Charles P. O’Brien of the University of Pennsylvania’s Center for Studies of Addiction, the chairman of the study committee.

“We want to do the right thing for the service member,” Smith said. “If there are areas in need of improvement, then we will work to improve those areas.”

Substance abuse has “long been a concern for the U.S. population and for its military in particular,” the report noted. “Dating as far back as the Revolutionary War, Dr. Benjamin Rush detailed the effects of alcohol on the troops. During the Civil War, addiction to opium prescribed for pain became known as the ‘soldier’s disease.'”

Today, the military’s approach to treating substance abuse “tends to be old-fashioned,” O’Brien said, noting the example of the military’s reluctance to use medications that can combat cravings and in other ways help treat addiction, he said.

Another problem is an overreliance on hospitalization and in-patient rehabilitation facilities, rather than the outpatient care that characterizes most civilian addiction treatment.

“Addiction tends to be chronic,” O’Brien explained. “The basic pathology of the addiction has a memory. It doesn’t go away that quickly.”

“We reviewed the training materials the U.S. Navy uses for counselor training. Those materials are based on guidelines originally written in 1984. They haven’t updated them,” said Dr. Dennis McCarty, a professor of public health and preventive medicine at the Oregon Health and Science University. “We think there’s a substantial opportunity to enhance the training for the counselors” who work with active-duty military personnel.

To reduce the stigma attached to getting help — and thus drawing more troops into its programs — the military should integrate prevention and treatment efforts more into primary health care and do more to preserve confidentiality for those seeking help, the report said.

The Institute of Medicine: http://iom.edu