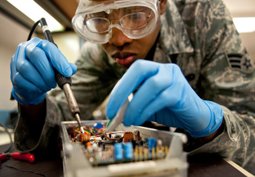 THE Air Force, as part of its recruitment efforts, is approaching young people for help in solving real-world technological problems using a collaborative online platform.

The initiative, which will be introduced on Thursday, will create a digital program called the Air Force Collaboratory, in which young people will be challenged to develop technologies for search-and-rescue operations in collapsed structures; to create software code for a quadrotor, a type of unmanned, aerial vehicle; and to determine where to place the newest GPS satellite.

The Air Force hopes the program will attract students in so-called STEM subjects — science, technology, engineering and mathematics — to work with its airmen on developing solutions for the three challenges, and, ideally, consider enlisting.

The initiative — which the Air Force will promote through digital advertising, social media and partnerships with groups like Discovery Education — is the latest recruiting effort created for the Air Force by GSD&M, an agency based in Austin, Tex., that is part of the Omnicom Group.

GSD&M has been the Air Force’s agency since 2001, developing campaigns to help it attract the over 28,000 recruits it needs annually; the agency said its work had helped the Air Force meet its recruiting goals each year.

Col. Marcus Johnson, chief of the strategic marketing division of the Air Force Recruiting Service, said the Air Force focused on “going after the best and brightest young men and women, with an emphasis on the STEM subjects. Whether they’re in high school or college, those topics translate into what we do in the Air Force.”

He said the collaboratory program was meant to appeal to men and women ages 16 to 24, including high school students still determining their future plans.

Ryan Carroll, a creative director at GSD&M, said the Air Force was “very much like the Apples and Googles of the world in recognizing the huge need for scientists and engineers. They reach out to kids at an early age and show them the amazing things they can do with science and technology.” He pointed to initiatives like the Google Science Fair, an online, annual, global science competition for teenagers, as an example.

Similarly, the collaboratory program aims to “inspire the next generation of scientists, engineers, technologists and mathematicians, and to show them all the amazing, science-related things the Air Force does,” Mr. Carroll said. The program will also allow students to “participate and solve real problems the Air Force solves every day,” he added.

Young people will be able to learn more about the initiative’s challenges at the Web site airforce.com/collaboratory, which will act as a forum. Challenge participants will be able to use custom-built tools to share ideas and work with airmen and other experts to develop solutions.

Not surprisingly, digital media will primarily be used to promote the program. Custom editorial content is being developed for the STEM hub of Good.com, a global community of “pragmatic idealists,” while custom videos are being filmed for DNews, an online video series from Discovery Communications; the videos will feature the DNews hosts Trace Dominguez and Anthony Carboni. The technology network Technorati is asking bloggers to create custom posts on the collaboratory and related subjects, while the Air Force will pay to place videos on Web sites like YouTube, Blip and Machinima. In addition, the Air Force will promote the initiative on Facebook and Twitter.

Digital banner advertising will run on the Web sites of Scientific American, Popular Science and The Verge. One set of ads depicts an Air Force helicopter approaching a scene of destruction after a 7.0-magnitude earthquake that has trapped dozens of survivors. The copy reads, “Your idea could save them. The Air Force Collaboratory. Search and rescue 2.0 is now open. Start collaborating.”

The Air Force also is working with Discovery Education, a division of Discovery Communications, on an outreach program for high school science and math teachers.

Colonel Johnson said that although the collaboratory would run through November, new challenges could be created after that. In addition, he said the Web site would carry no overt recruiting messages, nor would the Air Force actively recruit challenge participants, since the initiative was meant to raise interest in the Air Force and possibly encourage participants to seek out more information about opportunities there.

The budget for the campaign is $3.7 million.

Diane H. Mazur, a former Air Force officer, professor emeritus of law at the University of Florida and author of “A More Perfect Military: How the Constitution Can Make Our Military Stronger,” said that although the collaboratory concept was “good, it’s not sophisticated to the degree it needs to be to attract the people they think they want to get.” She added, “This is a good direction if you do it well.”

David R. Segal, a professor of sociology at the University of Maryland who specializes in military sociology, said that while recruiting high school students to “work in military laboratories on military problems” was not new, “what seems new is having interns work online with Air Force scientists.”

“I think they will certainly recruit a good number of high school students interested in science, engineering, technology and math to work on the problems identified. That part is easy,” he said. “Recruiting the same people then to come into the Air Force as enlisted men and women might be more difficult. They are likely to want to go to college.”

As a result, he said, the collaboratory would probably be more successful recruiting Air Force Reserve Officers Training Corps students than airmen.