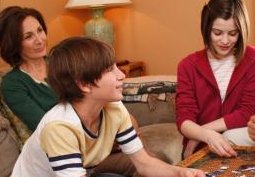 On busy school day mornings, we try to send our children off with love. We sandwich “I love you. Have a good day! between “Where’s my homework?” and “Can you pick me up after soccer practice?” We’ve got a suggestion that can help you build the feel of your love into a child’s morning routine, so you can actually accomplish your goal.

Set the alarm fifteen minutes early. Five minutes is for you to enjoy the quiet of the morning before the stampede begins. Ten minutes is for pajama-clad Special Time before anybody has to rush anywhere. First thing in the morning can be a wonderfully effective time to connect with children, especially children going to school where they won’t get to see you all day.

Fill them up with your warm, playful attention before worrying about their balanced breakfast. Turn the snooze alarm into the snuggle alarm. Make sure everyone in the house knows they are loved and cared for, and welcomed into this new day, before any of the many mundane chores gobble up your attention. Even ten minutes of your undivided attention can bolster a young child who is anxious about the separations morning often brings.

Children often experience sleep as a separation. Much of the morning’s usual dawdling is often a child’s reluctance to let go of you now that they feel reunited after the long time away in Dreamland.

Allowing a child to experience morning as a happy reunion, rather than a disconnected push toward yet another separation, can change the tone in the house and set them on a path toward a happier day.

You’ll be amazed how much more effective and cooperative children can be when their need for affectionate connection is given first priority. A happy, confident child is much easier to wrangle out the door to face the busy activities of the day. And a child who feels emotionally connected and relaxed is better able to transition into the school environment and to absorb the day’s learning.

Here’s how it can work

When my son started preschool, getting used to the new routine was hard for us all. We were all used to our laid back mornings where my son would sleep until he woke up on his own. When he did wake up, we would hang out in pajamas and play for a while and not worry about breakfast until he said he was hungry or get dressed until we were ready to go out.

Of course preschool changed all this! Now I was giving orders all morning: Time to get up, eat your breakfast, we need to get dressed, and worst of all, “We don’t have time to play, we have to go!” All this happened even though I’m actually pretty relaxed about having to be at school “on time.” As I said to a friend, there are no tardy bells in preschool!

My son didn’t like this scenario at all. He became frustrated easily and I listened to may tantrums around trivial issues like the shoes he wanted to wear, or whether I put milk on his cereal (or not!). I understood that it was good to listen to his feelings, and was OK about doing that (most of the time). But I was still feeling like a drill sergeant, and I could tell that my son was left feeling like he never got to do what he wanted to do in the mornings. It was a lousy way to start the day for us all!

When we introduced Special Time into our mornings, I made a chart with pictures of all the things we have to do in the morning, including Special Time. As I was making the chart, I thought about where to put Special Time in our morning routine. The temptation was to put it after all the “business” had been taken care of, but I realized that in order to build a good current connection with my son, it would be best if Special Time was first thing we did.

The changes have been tremendous. Where before just getting out of bed was sometimes a struggle, now when he wakes up (even if he has to be gently woken) he hops up and says, “Let’s do Special Time!” Our struggles over getting dressed and ready to go are significantly diminished. Now when I need to get him moving, I can just ask him to look at the list and tell me what we need to do next. Now I don’t have to be the nag, I get to be the assistant who helps him get dressed, brush teeth, etc. when he tells me it’s time. We still have days where getting out the door is a struggle, but things are much smoother. Taking just five minutes to make sure that things go his way first thing in the morning starts us out on a note of connection and cooperation.