Spying on Santa with NORAD 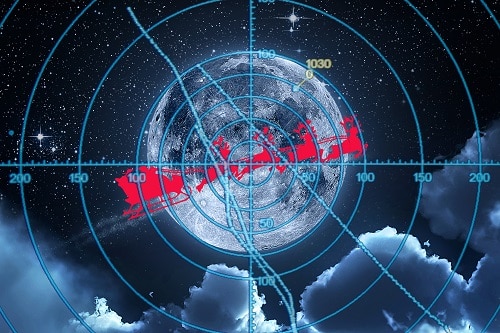 Have you ever wondered how Santa gets all around the world in just one night? Some say it can’t possibly be done. Others chalk it up to Christmas magic. Well, however it is he gets around, one thing’s for sure: NORAD is watching.

Just like they have for more than 50 years, the North American Aerospace Defense Command (NORAD) will be keeping an eye on Santa as he makes his rounds on Christmas Eve. Forget about watching the Yule log! Nothing beats the thrill of following Santa and his reindeer as they deliver presents and cheer to homes everywhere.

But the fun isn’t meant only for Christmas Eve. Over at their official North Pole Headquarters, NORAD will drop you right into Santa’s workshop, full of fun activities for all ages. You can even read their Secret Santa Files, full of all the Santa-related secrets NORAD has been able to compile over the years.

Of course, there’s the star of the show: the Tracking Map. See where Santa is at all times during his big ride. Whether he’s in Colorado or Cambodia, Ireland or Idaho, NORAD will point him out.

While you’re waiting for the reindeer to take off, hop over to the Arcade where you’ll find a bunch of fun, festive games to play. And don’t think you’ve ever played them all. NORAD is releasing a new game in the North Pole’s Arcade every day until Christmas! Perfect for kids on a break from school.

Too busy baking cookies and wrapping presents to play any games at the North Pole? Don’t worry! NORAD’s bringing you some awesome holiday tunes so make sure you turn the volume up when you arrive at their North Pole headquarters. With an ultimate playlist of Christmas classics performed by the US Air Force Academy band, the US Merchant Marine Academy band, the US Coast Guard band, and more, you’ll be rocking around the Christmas tree in no time!

There’s plenty more to do with NORAD at the North Pole. Read up on the magic of Christmas and holiday traditions around the world in the North Pole Library. If you’d rather watch than read, head over to the Theatre and watch a few short movies from the NORAD team. For additional updates on Santa’s Christmas prep, follow NORAD’s Santa trackers on Twitter and Facebook. Just make sure you’re keeping an eye on that map. It won’t be long until his sleigh is passing over your town…