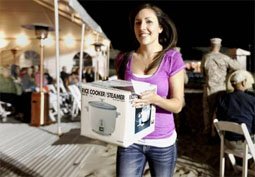 The Live, Laugh and Learn featured a book signing event with two authors, motivational presentations and a comedy skit designed for military spouses.

“We want to bring hope, love and perspective to our fellow military spouses,” said Kristine Schellhaas, 2013 Camp Pendleton Military Spouse of the Year and co-host of Semper Feisty Radio.

“I had interviewed some of the authors from the first lady’s reading list on my radio show, ‘Semper Feisty,’ and I thought ‘What a better way to bring these ladies to the spouses than to have an event on the base,” said Schellhaas, who is also the founder of USMC Life.

The night started with laughter as Mollie Gross, who is a military spouse, comedian and author, entertained the audience with what she calls “military wife humor.”

Traci Kessell has been a military spouse for four years and said she first heard Gross’ stand up when she was a newly-wed.

“She’s been really inspiring,” said Kessell. “She really helped me to get a better perspective of the military lifestyle.”

Schellhaas said it’s important to have a good sense of humor when it comes to frequent relocations and long separations due to deployments.

“The most important thing to bring home from this is perspective,” Schellhaas said. “We can get lost in our emotions and feelings.”

Schellhaas shared a recording of a news cast that featured her husband in a firefight in 2003.

“It brought tears to my eyes,” said Kessell.

Ellie Kay, military spouse, mother of seven and author of 15 books, shared some pointers on how to keep a positive attitude and remain strong for your family.

“I just want them to know that what they do matters and is important,” Kay said.

After laughter and tears, the wives met with the guest speakers to have their books signed and to talk about their personal experiences as military spouses.

“I love the conversations,” Schellhaas said. “I love hearing about their pregnancies, their families and how they got married. Everyone’s lives are so different, yet we all share something in common; the military.”

For more information on Kay and for a list of her books, visit elliekay.com. To learn more on Gross, her comedy and book, visit molliegross.com.