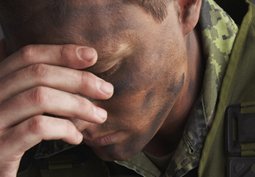 WASHINGTON – Military leaders all the way to the Commander in Chief are drawing attention to the importance of good mental health and putting resources into programs to help Veterans, service members and their families. But when it comes to recognizing and treating mental health problems, such as depression, Spouses are the first line of defense, some treatment professionals say.

“The Spouse knows the patient better than I do; they’ve been living with them for years,” Dr. James Bender, a clinical psychologist with the Defense Centers of Excellence for Psychological Health and Traumatic Brain Injury, told me today. “They’re kind of at the front line of this.”

Other signs of depression include:

“He may be lying on the couch watching TV all the time and gaining weight,” Bender said. Sometimes there is one traumatic event that triggers depression, making symptoms more sudden and easier to identify, Bender said. “But usually it’s a cumulative effect that gets a little worse day by day, and sometimes the spouse just gets used to it.”

Indeed, Bender said, “I’ve had patients who have been depressed and didn’t really know it.”

For people who don’t recognize the symptoms in their loved ones, the manifestations of depression can be frustrating. “Maybe it’s a parent who used to be engaged with the kids and now just wants to sit around and watch TV,” he said.

As we spoke, I thought about all the couples – and families – whose relationships could be ruined by untreated depression. Although there is no hard data to prove it, Bender agreed, “it’s got to be really high.” In fact, he added, “patients usually come in and say, ‘My Spouse suggested it, but I think I’m fine.’”

Bender said he likes to bring in the Spouse, at least once, with the patient’s permission to explain the form depression often takes. “Depressed people often are not fun to be around,” he said. “It can be a lifestyle change for the Spouse.”

The good news is that depression is very treatable, especially when families are supportive. “Having good family support is a very good predictor of getting better,” he said. The best treatment combines drug therapy with psychotherapy, or “talk therapy,” Bender said. Antidepressant drugs treat the symptoms, but not the underlying cause of depression, which a counselor can help determine and give coping strategies for, he said.

“What you’re doing is gaining the skills to deal with what makes you depressed,” he said. “It’s really skills-based training.”

Medications can take two to eight weeks to work and are effective about 75% of the time, Bender said, although there can be side effects, such as decreased sex drive. Psychotherapy usually involves an hour a week with a counselor plus homework, but typically takes less than three months to complete, he said. “Most people who complete psychotherapy, learn how to fix themselves,” he added.

The first step in treatment is to talk to your family doctor. If he or she doesn’t refer you to a counselor, Bender said, you can find one in your area through the American Psychological Association. The hardest part, however, can be recognizing there is a problem and discussing it with your loved one.

“One thing that is successful with a lot of spouses is to say, ‘I want you to do this for us. Maybe you can deal with you not feeling well, but for the sake of me, or for the sake of our marriage — or for kids – I would like for you to get treatment,’” Bender said.