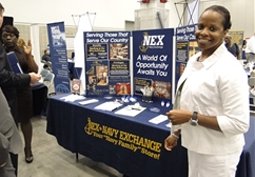 HAMPTON, Va. – Like many Military Spouses, Allison Lattuca doesn’t mention her husband’s Navy service as she job hunts with each forced relocation every few years.

“I don’t put it on my resume,” Lattuca told me at a Chamber of Commerce Hiring Our Heroes’ job fair here Aug. 2. “But if asked, I tell them the truth.”

Lattuca recently gave up her job at Morgan Stanley Smith Barney in Santa Barbara, Calif., to relocate here with her husband. “My job now is finding a job,” she said.

Lattuca’s resume shows a Bachelor’s Degree and years of work experience in investments and securities. But those years show gaps in employment that inevitably come up at job interviews. “Sometimes it does come back to haunt me,” she said. “They don’t want to put that kind of money into you, knowing you’ll be moving again.”

Lattuca’s employment challenges are common for Military Spouses. Thankfully, what is changing is employers’ willingness to deal with those challenges. That is due largely in part to the efforts of the U.S. Chamber of Commerce’s Hiring Our Heroes program, which partners with the Military Spouse Business Alliance, the Defense Department’s Military Spouse Employment Partnership and the first and second lady’s “Joining Forces” campaign to support Military families. Together, this quartet provides a powerful support network for Spouses who otherwise may find job-hunting a lonely endeavor.

What Lattuca and others found at the Aug. 2 job fair were people who understood their challenges – most either are or have been Military Members or Spouses — and were willing to help. From a spouse networking event to workshops that gave career advice specific to them, Spouses were among kindred spirits here.

They heard from Spouses like Randi Klein, a former Navy officer whose husband served as a submariner for 33 years, who told them about In Gear Career, a nonprofit that gives networking and career help to Spouses. And Stefanie Goebel, another former Navy officer, who gave a presentation on the Chamber’s eMentor leadership program for Spouses and Veterans. Then there were the hiring officials themselves. Nearly every organization seemed to have a person who either served in the Military or was a Military Spouse. There was Andrea Hall, a CSC recruiter who was an Army Spouse for 21 years, and Lockette Dickerson, a Navy Wife and human resources associate for the Navy Exchange.

Shronda Walker, who is new to the Military, said she felt optimistic after attending the fair. Her husband, Marshaun, joined the Navy 15 months ago and Shronda recently joined him here from their hometown of Buffalo, N.Y. They can get by on his income, she said, but she would prefer to work. They don’t have children and the days alone can drag on while Marshaun works 13-hour shifts, she said.

“I’d like to have something to do,” Shronda, 23, said. “There’s only so much cooking and cleaning you can do.”

Walker and Lattuca represent some 85 percent of Military Spouses that the Defense Department, Chamber, and Joining Forces officials say surveys show either want or need to work.

“Yes, I want and need to work,” she said. “We like to go to restaurants and the movies, and to maintain a good lifestyle. And, it’s important to my self-worth and self-value that I can come home at the end of the day and feel like I’ve contributed.”

The combined efforts of the Chamber, DOD and the White House are giving Spouses that choice.