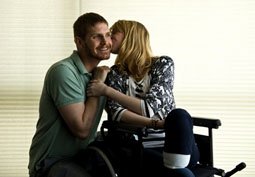 In her dreams, Adrianne Haslet-Davis is dancing. Then, she wakes up and remembers she can’t.

The ability to dance was taken from her when two bombs were set off at the Boston Marathon in April. Adrianne and her husband, Adam, a captain assigned to Hanscom Air Force Base, Mass., who redeployed from Afghanistan two weeks earlier, were standing near the second bomb when it exploded.

“The force of it just knocked us off our feet, and we landed all twisted together like a human pretzel,” she said.

In the confusion, the Davis’ started to take stock of the situation and figure out what to do next.

“We asked each other if we were okay, and we both said we were,” Adrianne said. “So I told Adam we needed to move.”

“My left leg just didn’t seem right, so I asked Adam to take a look at it,” she said.

Adam did and started screaming. That’s when Adrianne looked.

“My foot was barely attached and some of my leg was mangled and there was a lot of blood everywhere,” she said. “I just started screaming and saying ‘Oh God, oh God, oh God.’”

Knowing there was no way she could walk, Adrianne crawled toward the nearest building, screaming, crying and panicking. Adam, also suffering injuries of his own, crawled up beside her and used his belt as a tourniquet on Adrianne’s leg.

“I just knew we had to stop the bleeding,” he said. “That was the most important thing to me at the time.”

For Adrianne, the wait for help to arrive was one of the longest and hardest of her life.

“There was a time there that I thought I might not make it,” she said. “I told myself, ‘Wow, this might be it.’”

Emergency responders showed up several minutes later and started organizing injured people by priority. By now, the adrenaline and shock were wearing off, and Adrianne was in a lot of pain.

“I just kept screaming at anyone who walked by, telling them I was a dancer and I needed them to save my leg,” Adrianne said.

After what seemed like hours, but was really only minutes, Adrianne was loaded into an ambulance and rushed to Boston Medical Center. There, she was prepped for surgery, the whole time pleading with the doctors and nurses to save her foot.

“I kept telling them I was a dancer and that I needed my foot,” Adrianne said.

Then, everything went black.

When Adrianne woke up, she was in a hospital bed, surrounded by her parents.

“I told my mom my left leg was asleep, and it felt like it was falling off the bed,” she said. “So I asked her to help me, and she just looked at me and said, ‘Adrianne, you don’t have a leg.’ That’s when I lost it.”

She grabbed anything within reach – clipboards, cups, blankets – and started throwing them and screaming.

Then, after several minutes, she calmed down and got quiet.

“I was depressed and sad and angry all at once,” Adrianne said. “And lying there, I thought my life was over.”

Her job as a dance instructor was definitely over, she told herself.

“All I could picture were these bulky, awkward prosthetics, and there was no way I could see being able to dance in one,” she said.

Then, hope and inspiration came from an unlikely source – other amputees.

“They would visit me and talk to me about how life isn’t over and tell me about all the advancements in prosthetics and amputee care and I started feeling better about my situation,” Adrianne said.

Her left foot was now gone, along with part of her leg midway up the calf, but Adrianne’s drive and spirit were beginning to grow.

“The thing with this type of injury is that while it is definitely physical, there is so much of it that is mental,” she said. “I had to get to the point where I basically grieved for my leg and then moved one, telling myself, ‘Okay, this is day one of your new life.’”

Still, Adrianne’s the first to admit her road to recovery has been made easier by the support of her husband, her family and well-wishers from around the world.

“It’s really been tremendous how many people have shown their support,” she said. “Even the Air Force has been great. They’ve done everything possible to help us out and make this experience easier on us.”

Adam is also recovering from his injuries. He didn’t lose any limbs, but his body was peppered with shrapnel from the blast.

“The doctors pulled a zipper out of my leg from a backpack,” he said.

While his injuries are healing, he can’t shake the questions that bother him. How could this happen? Why did this happen to my wife instead of me? How can I make this better?

“At the end of the day, though, we’re both still alive, and I thank God for that every day,” Adam said.

Both were released from the hospital and are home now. But their days are still filled with physical therapy appointments and doctor visits.

“It’s going to be a long, slow road to recovery,” Adrianne said.

One leg isn’t slowing Adrianne down, either.

“I told myself I will be walking in a few months, dancing a little while after that and I want to run the Boston Marathon next year,” she said.

Adam is heading back to work at Hanscom AFB and plans to stay in the Air Force.

“Really, we’re just taking it one day at a time,” he said. “Some are good, some are bad, but we’re together and that’s what matters.”