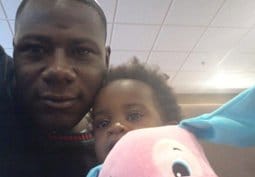 She was worth the wait.

A South Carolina soldier has been reunited with his 22-month-old daughter after she was given up for adoption without his knowledge or consent when she was born.

“I got my daughter back,” said 31-year-old Achane, according to The Salt Lake Tribune. “I’m very happy. It’s 22 months too long, but the wait was worth it.”

Also at the hearing were Jared and Kristi Frei, the Utah couple trying to adopt the girl. They didn’t speak to reporters Friday but have kept a blog about their efforts to adopt the baby, who was given up by her birth mother.

The Freis’ attorney, Lance Rich, said the experience has been “extremely difficult” for them, ABC News reported.

The case remains on appeal, and the next hearing is scheduled for March.

Achane wed Teleah’s mom, Tira Bland, in 2010. The couple, living in Texas at the time, were experiencing marital woes before Achane was set to transfer to South Carolina to serve as a drill sergeant at Fort Jackson, according to court documents.

As they continued to fight, Bland, who already had a daughter from a previous relationship, worried that she would end up a single mom, The Tribune reported. She suggested having an abortion or putting the baby up for adoption — which Achane didn’t want.

In January 2011, Achane left for South Carolina, where he expected Bland and the baby to join him. But while he was gone, Bland contacted the Adoption Center of Choice in American Fork, Utah, and set the wheels in motion for Teleah’s adoption.

She gave birth to the girl on March 1 in Utah.

Achane was in the dark the entire time, his lawyers said.

He tried to reach Bland but she apparently vanished. It wasn’t until June 2011 when she reportedly told her estranged husband what she had done.

That set the stage for Achane to try to win back his daughter, who had already been placed with the Freis.

On their blog, the couple said that they had contacted Achane to serve him with an adoption petition for Teleah, whom they called Leah.

“To our great shock and dismay, he objected to our petition and intervened to stop the adoption,” the couple wrote. “Over the last 19 months, despite the law requiring that a father show interest in his child and at least attempt regular communication to establish a bond, the father has never shown any interest in Leah other than to hire an attorney.

“He has never sent her clothes or toys, or even a gift on Christmas or her birthday,” they added. “He’s never inquired into her health and well-being, or other details like when she started crawling, walking, talking, or cutting her first tooth.”

Regardless of the Freis’ claims, Achane wanted the girl back — and had every right to her, a judge ordered late last year.

The judge said he was “astonished and deeply troubled” that the Adoption Center of Choice would circumvent the rights of the father. The agency couldn’t be reached for comment.

The Freis tried to have the judge’s order halted, but the Utah Supreme Court overturned the request earlier this month, which allowed for the father to win custody of Teleah.

Achane’s attorneys said he is even allowing the Freis to see her for at least the next six months to ease her transitioning.

“If the Freis are cooperative, this could be a situation where it may be very long term,” attorney Mark Wiser told The Tribune. “If they are not, it may be more limited based on the way that transition is going.”

Achane, however, is supposed to move to Hawaii in March as a non-commissioned officer — a role that will allow for flexibility with his schedule, The Tribune said.

Ultimately, Achane said, he’s thankful for the care the Freis have shown his daughter.

“They raised my daughter right, I believe,” he said, according to NBC affiliate WMBF in South Carolina. “I hold nothing negative against them. They love my daughter as much as I do.”