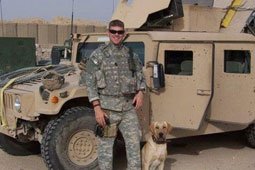 Ninety percent of Military working dogs are adopted by their former handlers. MSNBC.com‘s Rebecca Ruiz reports the story of one former Sergeant’s journey to reunite with his yellow Labrador– Diego– who searched for weapons alongside him:

Logan Black has only one dream about his time in Iraq.

From 2006 to 2007, the former sergeant was deployed in Fallujah, sweeping for improvised explosive devices (IED), ammunition, firearms, grenades and raw bomb materials. He survived firefights and IED attacks.

What Black dreams about, though, is the yellow Labrador — Diego — that searched for weapons alongside him.

Black, 34, began training with Diego at Fort Leonard Wood in Missouri when the dog was a year old. He parted with Diego upon leaving the Army in May 2007. Black has wondered about Diego’s fate ever since, leaving phone messages with his unit every six months or so with updated contact information, but said he never heard back.

“I figured he had to be in Afghanistan or Iraq the majority of the time after I left,” Black said. “[Diego’s safety] was always a concern, but I tried to push that out of my mind. I hoped that he had a handler that kept him safe.”