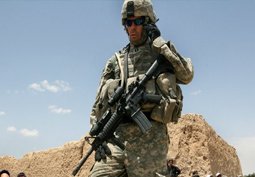 The U.S. Army wants to press ahead with an ambitious program to bring the capabilities of the smartphone and the tablet computer to soldiers on the move in battle, despite problems identified in testing, according to briefing slides for a high level Pentagon panel.

The Defense Acquisition Board decides Thursday whether to push ahead with full production of the program: the Warfighter Integration Network — Tactical, Increment 2, or WIN-T Inc 2.

The $5 billion program was rolled out to several combat brigades in Afghanistan last month. The system is built on a truck-mounted mobile network backbone but also includes smartphone and tablet-like handsets, called “End User Devices,” that can transmit text messages, GPS locations and other data.

Now the Army wants to extend that to 125 combat brigades across the whole force, despite problems identified last year in testing.

“The overall WIN-T Inc 2 system is not operationally suitable and not survivable,” concluded a test last year overseen by the Pentagon’s Director of Operational Test & Evaluation J. Michael Gilmore, according to the slides.

But an Army spokesman said the system “has demonstrated significant improvement since its first operational test.”

The Army “continues to refine and simplify the system to make sure the best capabilities are delivered to the soldier throughout the program’s lifecycle,” Lt. Col. Jerome Pionk said.

But he added that the Army “will fully support” whatever decision the Defense Acquisition Board makes with respect to the program.