Soldier Returns to War After 20 Surgeries 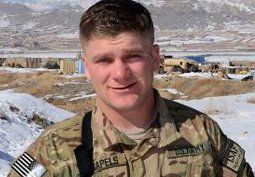 WARDAK PROVINCE, Afghanistan – Three years after suffering war wounds that resulted in more than 20 surgeries, Army Sgt. Michael Krapels is back where he wants to be: serving alongside his fellow soldiers in Afghanistan.

Krapels, who is with Chosen Company, 2nd Battalion, 503rd Infantry Regiment, 173rd Airborne Brigade Combat Team, had always wanted to join the military, and after attending college at the request of his parents, he enlisted in the Army on his birthday, Oct. 7, 2008.

“I made a promise to my parents that I would go to college first, so I did two years at the University of Maine,” he said. “A friend went up there to play football and I got accepted, so we went up there and roomed together.”

The intention was to finish his college education, but a visit to the recruiter by his best friend back home in Sparta, N.J., changed that plan, and his life, forever.

“Halfway through my sophomore year of college, my best friend from back home — we had always talked about enlisting together — told me that he had gone down and spoken to a recruiter and enlisted,” Krapels recalled. “That started the ball rolling with me wanting to go, and later on that spring, a buddy of mine got hurt in Helmand province, and that made it definite.”

Once he left Sparta, his transition from civilian to deployed soldier was a quick one. From Fort Benning, Ga., for his one-station unit training and airborne school, to Vicenza, Italy, home of 2nd Battalion and the 173rd ABCT, to training and a mission readiness exercise, Krapels quickly found himself high in the mountains of Afghanistan’s Kunar province by the winter of 2010.

But almost as quickly as he arrived, Krapels left Afghanistan after machine-gun fire hit both of his legs, Jan. 14, 2010.

“One went through my left ankle, one through my right calf — it cut my Achilles [tendon],” Krapels said, listing just a few of the rounds that hit him. “I lost a couple of inches of bone in my shin, [and] lost the feeling in my foot and a lot of mobility.”

The serious nature of injuries took him to the Walter Reed National Military Medical Center in Bethesda, Md., and he began his fight to recover that would last more than two years.

Between surgeries, Krapels spent 10 months in a wheelchair, struggling and wondering if he would ever be the same again, until a visit from 2nd Battalion’s highest-ranking enlisted soldier, Army Command Sgt. Maj. Michael Ferrusi, changed everything.

“Sergeant Major Ferrusi came down in July of 2010 to talk to me,” Krapels said. “That started the ball rolling with me really throwing myself into physical therapy and getting out of my wheelchair.”

“I told him, ‘There are two things you can do in life: you can either let adversity beat you, or you can beat adversity,’” he continued. “It’s not the act that defines you. It’s not what happened to you that will define you. It’s what you’re going to do from now and for the rest of your life based on what happened.”

Ferrusi, who was the battalion sergeant major at the time, was on leave and visited Krapels at Walter Reed. “I stayed there about five days with him, hung out with him, and in the course of five days, I got to know him — not just as a soldier anymore, but as a person.”

Krapels said he learned that that Ferrusi had broken his neck in Afghanistan during Operation Enduring Freedom I, lending weight to his words and a voice of credibility and experience to his advice.

“It was motivating, because I found out that he had been injured, and having someone that high up who’s been through the whole recovery process come in and share some of his wisdom with me, it was an eye-opener,” Krapels said. “When the sergeant major came, that was the catalyst — like, ‘If he did it, I can do it.’”

After that visit, Krapels threw himself into rehabilitation and stated in no uncertain terms his desire to make it back to the fight.

“There were guys down there with no legs that were out running,” he said. “I couldn’t accept the fact that I wasn’t going to be a whole person and be able to do my job anymore, so I just put my nose into recovering.

“Everyone in my chain of command at Walter Reed knew what my intentions were,” he continued. “I actually removed myself from their physical therapy, because I thought it was moving too slow, and started doing a lot of it on my own.”

In June 2011, Krapels traveled to the Center for the Intrepid at Brooke Army Medical Center at Fort Sam Houston in San Antonio. The center specializes in many things, including advanced outpatient rehabilitation for patients like Krapels. It was there that his rehabilitation made a breakthrough when he was fitted for an intrepid dynamic exoskeletal orthosis, or IDEO.

The IDEO is an external prosthesis that wraps around the leg, just below the knee, and has a footplate that stabilizes the foot and ankle and a pair of carbon fiber rods that connect the two. The device works by offloading the weight of the wearer, alleviating pain when walking or running.

“After I received the IDEO,” he said, “I was able to start running again.” After a month in San Antonio, Krapels returned to Walter Reed to check his status and evaluate his progress. He went through a physical therapy revaluation and was cleared to return to duty.

In November 2011, Krapels returned to Italy, to the same battalion, and back to Chosen Company, and tried to fit back in as quickly as possible.

“I didn’t get any special treatment, which is good,” he said. “They welcomed me with open arms, and it was like I had never left.”

Ferrusi kept up with Krapels’ progress during his rehabilitation, and though the 2nd Battalion’s commander was a new one, by the time Krapels arrived back in Italy, Army Lt. Col. Michael Larsen knew who he was.

“When we finally got the word he was coming back, I was fired up,” Larsen said. “What a great example of persistence and motivation, and when I met him for the first time and saw his energy and what a positive person he is, it inspired me.

Once he returned to the company, Krapels got right back into the swing of things. With no physical profile limiting his actions, he resumed training with his unit for its upcoming deployment to Afghanistan. After three training rotations in Germany, he attended the Army’s Warrior Leader Course and graduated on the Commandant’s List.

He has been deployed to eastern Afghanistan since June with Chosen Company, battling the harsh weather and terrain, keeping up with every step of the other soldiers.

“He’s still hurting,” Larsen said. “But he still goes out and executes every patrol and never complains.”

His solid performance and his perseverance led Ferrusi to fight for, and ultimately to succeed, in getting Krapels promoted. On Jan. 1, more than two years from his visit to Walter Reed, Ferrrusi was able to pin Krapels with the rank of sergeant.

“In this business, you invest in what you see, and his past performance to me was an indicator of his future potential,” Ferrusi said. “I told him that, ‘I know you can beat this. I know you can come back, and I’ll support you. I know it’s going to be hard, but I won’t waver on you if you don’t waver on me.’”

Krapels “didn’t take no for an answer, continued to push himself physically and mentally to get himself back here to the unit where his true loyalties resided,” Larsen said. “He’s an awesome guy to have in the formation; I wish I had 100 of him.

“To have a tangible example that you can point to so other paratroopers can see in their midst, every day, the right mindset of a paratrooper,” he continued. “I think that’s what every commander wishes to have — an example they can always point to of a guy that doesn’t quit, a guy that doesn’t give up, who found a way to make it back to the unit and deploy with us. It’s a great success story.”

While the paratroopers of Chosen Company continue to patrol Afghanistan’s Wardak province, Krapels continues fighting the pain, but keeps a positive attitude as he does it, because he is finally back where feels he needs to be.

“When you sign up as an infantryman during a time of war, you’re signing up to fight, and when you get hurt and pulled out of a combat situation with guys that you’ve been training with forever, you feel like you lost your family,” he said. “I knew that they were going to be the same people — just different names — and I wanted to make sure that with some of the drive and experience I have, I could share it and help out.