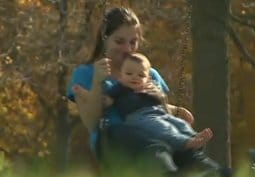 Milwaukee (CNN) — Rebecca Edmonds grew up a military kid and, like most military families, often moved as her dad rose through the ranks of the Navy.

Enamored with the military and her father’s service to his country, Edmonds decided in high school that military life was calling her.

“I think it’s definitely a tight-knit community, and I was willing to be a part of that,” Edmonds recalled of her decision to join the Reserve Officers’ Training Corps, commonly called ROTC, at age 18.

“I think the families are welcomed. I remember going to a base, and we’d be welcomed by these families we didn’t even know. ”

When the Air Force offered her a full scholarship to Marquette University, Edmonds jumped at the chance to become a nurse and serve her country. Marquette is a Catholic university, a perfect fit for the practicing Catholic.

Nothing captured her feeling of community and sense of military pride more than when her equally proud father, Capt. Tony Edmonds, swore in his oldest child as a second lieutenant in the United States Air Force.

“It was very special,” she recalled of her commissioning in July 2011, shortly after college graduation. “I was so happy that (my parents) had an opportunity to come out and be a part of that ceremony and have him administer the oath of office to me as an active-duty officer.”

Today, her dream of serving her country has been shattered.

Weeks before being commissioned as a military officer, Edmonds discovered that she was pregnant.

That was before she says she learned the Air Force forbid single parents from enlisting. The reason for the policy, according to Air Force officials, is that the demands of deployment and military service put strain on family life and even more so for single parents.

The Air Force accused Edmonds of committing fraud, ejected her from its ranks and revoked her $92,000 scholarship. Her case is currently under review.

Edmonds’ mother, Karen, a military wife for 25 years, said deployments are tough on all service members and their families, married or not. If her daughter were to deploy, Karen Edmonds said, her grandson would be well cared for by an extended family that includes the child’s father and both sets of grandparents.

Edmonds’ mother said she believes the policy discriminates against single women and encourages pregnant single women to abort their pregnancies.

Read the full story and watch the video here.