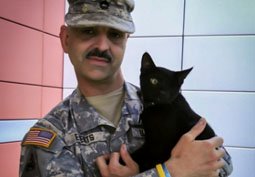 Sometimes love at first sight happens sight unseen; this is the case with an Army Reservist and a one-eyed cat named Tycho.

George has served in the military for more than 20 years and is currently in the Reserves. In May 2013, he adopted a kitten with an infected eye that required surgical removal, but what makes this story even more remarkable is that George made a commitment to save this cat before the two ever met.

The Army Reservist is assigned to the 416 Theater Engineer Command (TEC) in Darien, Illinois, a two-star division level command in charge of over 13,000 Army Reserve engineers in three brigades from the Ohio and Mississippi Rivers to the West Coast. He lives in Chicago and is currently heading to South Korea to assess Korean public utilities, and educational and medical facilities. It is a real world mission to help support and protect their government.

The demands of George’s career had him, his wife and their twin sons on the move since the start. They became well-traveled and experienced many historical places in the United States together, but his family now lives in Oregon for permanence and stability rather than moving every other year. George can only spend five weeks a year with them and their menagerie of rescued animals.

“Our family includes an 85-pound Golden Labrador, several amazing cats, a dwarf hamster that’s an adrenaline junkie and a blind fish,” George says with a laugh. “None of them are boring!”

A picture worth a thousand meows

Last year, George began searching for a cat to keep him company in Chicago. While browsing available cats on the Animal Welfare League of Chicago website, he saw a photo of a young cat and made an immediate decision to adopt him. George absolutely knew they were meant to be together, but the soldier had to wait three weeks before he could adopt Tycho since the little feline was scheduled for surgery to remove his infected eye.

The cat was worth the wait.

One-eyed cat with a nose for “stinky things”

Tycho is a gorgeous Brown Burmese mix who now rules George’s heart and home away from home. The Army Reservist recalls the adage that “cats have staff” and admits he is Tycho’s Chief of Staff.

“A cat chooses to stay with you,” he explains. “You don’t own a cat, you live with them. Dogs you own. I like that about cats. I like that they’re partners more than anything.”

The Brown Burmese has often been described as a “brick wrapped in silk” because it’s a compact and sturdy breed of cat, and surprisingly heavy for its size. Tycho is all that and more, sporting a beautiful chocolate brown coat with dark tabby markings. George insists that it’s impossible not to notice the cat’s remaining huge green eye, especially when his new pet friend stares at him with a laser focus. To this day, George is amazed by Tycho’s ability to adjust to life with only one eye.

“He’s highly intelligent and has adapted so well.”

Tycho’s name was originally Pippin, but he had far too much energy for that name. George has a passion for astronomy and renamed the one-eyed cat after the largest lunar crater visible from Earth. Since coming home with George, Tycho, being a feisty and spirited cat, has also earned a few nicknames such as “hot dog,” “little turd,” “little bugger,” and George’s favorite, “little panther.”

“Tycho is like a little five year-old boy: very curious, a sweetheart and he gets in trouble,” he says, adding, “and like any little boy, he loves stinky things. He loves to climb through my smelly hockey gear and loves to drop his favorite play toys – milk rings – into my shoes and boots only to dig them out again. I think if he keeps doing this his nose will fall off! I will have this little boy for the next 17 years. He is addictive!”

George pauses to reflect on another of Tycho’s idiosyncrasies: “He snores when he sleeps on his cat tree.”

A soldier walks into a shelter…

It was shortly after George saw Tycho’s picture on the Animal Welfare League’s website that he paid them a visit after work. His mission: to let them know that Tycho was going to be his cat. The Reservist was in uniform at the time, which inspired a conversation about the shelter’s partnership with Pets for Patriots, a nationally-operating charity helping veterans adopt harder-to-place pets like Tycho.

The soldier wasted no time in applying to Pets for Patriots and has since been very pleased, so much so that he wants the Army Press Corp to spread the news about the organization’s good works.

George is convinced that the unique program would be a big hit in his hometown: “Pets and soldiers sell! This is a great program.”

Back home, the career soldier is equally in love and amused with his new companion, enjoying the cat’s dynamic personality and antics.

“He’s a little rock star,” boasts George. “He likes to show off and strut, tailed raised proudly if he knows you’re watching him. And he loves to be brushed. He’ll stand on my chest while I brush him then roll over to each side to make sure I brush him all over.”

When George is spending time with his family in Oregon, Tycho stays with George’s neighbor, where he spent his first Christmas as well. There was the inevitable destruction of some ornaments, but Tycho has a friend and an amenable, animal-loving human who will happily cat sit him when George is away.

The Army Reservist is a firm believer that rescuing animals is the only way to go.

“The unconditional love can’t be beat,” he says, “and if you’re a member of Pets for Patriots, you’re helping save a special needs or older pet when you adopt an animal from one of their partner shelters.”

When did you know that your pet was “the one?”

For more inspiring stories, or to get involved with this amazing organization, visit Pets for Patriots.