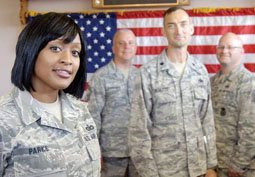 She would never have been an aerospace medical technician and she would not be in the Air Force she loves.

Muehlberger marked her for death when he saw the African American airman studying at a Wichita Falls, Texas, coffeehouse with friends on the evening of April 20, 2010.

The 22-year-old pulled a 12-gauge shotgun from behind his back and said to Parks, “Hey n—–r, it’s Hitler’s birthday.”

Muehlberger opened fire on Parks, her study buddies and one other woman — three of them black, a fourth Hispanic — leaving all of them wounded.

Three years and four surgeries later, Parks is back at work as a medical technician at the 88th Medical Group, Wright-Patterson Medical Center, Ohio, and working on her sports and health sciences degree at American Military University. She hopes to be an occupational therapist.

She shares her recovery with fellow airmen and veterans.

“The Air Force is big on resilience and the ability to bounce back from any unfortunate event or setback in life, whether it’s a tragedy, a death or an illness,” she said. “It’s not something we’re born with. We each have to obtain the skills to do it. I didn’t always have this in me. It took me a while. Resilience doesn’t solve the problem. It’s a constant work in progress.”

While Parks’ current studies to become an occupational therapist will help others overcome similar traumatic experiences like hers, it was her original security forces training that she credits for surviving the shooting.

After Muehlberger triggered his first shot, Parks made a run for cover as he fired another round at her. After she tripped, Muehlberger stood over her and blasted buckshot into her lower right leg at point-blank range.

Parks’ security-force training kicked in, as well as her survival instinct. She barely flinched, slowed her breathing and didn’t move until Muehlberger took off.

“I got the furthest of the people he targeted that night. I remember seeing tile and carpet … and I remember trying to calm myself down to give off the appearance that I was dead,” Parks said. “I felt the bullet in my right leg, but I didn’t budge after that because I wanted to remain dead in his eyes. I didn’t want to give him a reason to continue to unload.”

It was a smart decision. Muehlberger drove to a bar and unloaded a round on the bar’s doorman, Tim Donley, a 23-year-old Iraqi war veteran, killing him. Muehlberger fled the scene, but police found him later at his home, dead from a self-inflicted gunshot wound.

Parks spent 38 days recovering in Dallas — eight in the hospital and an additional 30 at the Fisher House. When she got back to Tinker Air Force Base, Okla., she was still using a wheelchair to get around. But her then-commander, Lt. Col. Troy Roberts of the 72nd Security Forces Squadron, had her come in every day so she could get back to being part of her squadron.

The two ammo cans full of rocks Roberts gave her made a big difference, said Parks, who also was treated for post traumatic stress disorder.

“It was the best idea ever because it allowed me to keep my upper body strength,” she said. “I had a metal rod drilled into my leg from my femur to my ankle, but I did water aerobics and swam for [physical training] to get my leg back as strong as I could.”

If Parks could confront Muehlberger, she would want him to face his victims and their families and see how they’ve overcome the physical and emotional pain he inflicted on them three years go.

“It was kind of like he disrupted my life,” she said. “Early on in my recovery, I accepted the reality of it. I was angry. I was hurt. I’m always going to be angry and hurt because my life is basically forever altered by this situation.”

But Parks didn’t lose her compassion. “Honestly, reading his history, I would let him know it’s OK to get help,” she said.

“I had so much support around me from my Air Force family, my family, my friends,” she added. “I had so many reasons to continue. I never thought I was in it alone.”