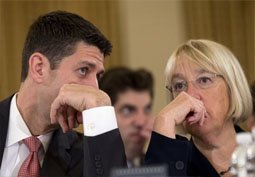 Even as the Senate rushes to pass the new bipartisan budget agreement, lawmakers are acknowledging they botched part of the plan and are vowing to undo a cut to military retirement pay before it takes effect in 2015.

Senators on both sides of the aisle said Tuesday they didn’t intend for military retirees to take a hit in the deal, which is designed to ease some of the budget “sequester” cuts now, replacing them with fee hikes and promises of future spending cuts.

But while many Republicans said the budget problems should be fixed now, Democrats rejected that, saying the deal should be passed as is, even with the military cut, and then Congress can come back and fix it later.

“We can and we will look at other hopefully better ways to change this policy going forward. But opening up this bill to changes today after the vast majority of Congress has voiced their support for a deal that ends the repeated crises we have faced in this nation is not the solution,” Sen. Patty Murray, Washington Democrat, said Tuesday on the Senate floor.

Ms. Murray, chairman of the Senate Budget Committee, spoke shortly before a dozen Republicans joined Senate Democrats in defeating a GOP-led filibuster of the budget accord on a 67-33 vote. The House on Thursday passed the budget on a 332-94 vote, with strong majorities of both parties in support.

A final Senate vote is slated for Wednesday.

Under the plan, benefits for military retirees under age 62, including those who medically retire after being injured in the line of duty, would see cost-of-living adjustments cut to 1 percent less than the Consumer Price Index.

The measure is expected to save about $6 billion over 10 years and will go into effect in 2015, but it could cost a senior enlisted-service member who retires at age 40 more than $70,000 over his lifetime, according to a release from Sen. Roger Wicker, Mississippi Republican.

Sen. Jeanne Shaheen, New Hampshire Democrat, announced she’ll write a bill to eliminate the cuts and replace them by ending corporate tax breaks — something Republicans refused to do during this round of budget talks and are unlikely to want to consider in the coming days.

While praising the budget compromise, Ms. Shaheen said it was “not perfect.”

“The plan I am going to introduce will undo changes to future cost-of-living adjustments for military retirees and will instead achieve savings by closing corporate tax loopholes. It’s a smart, pragmatic fix and I hope it will generate bipartisan support,” she added.

Sen. John McCain, an Arizona Republican and senior member of the Armed Services Committee, said he backs the deal despite the military retirement cut and that he’s certain Congress will fix it.

“We have a commission working on this whole package right now. I’m confident we will fix it next year,” Mr. McCain told reporters Tuesday after the vote. “I’ve talked to all four leaders of the services. All of them want this passed because they need the relief from sequestration. Every military leader supports this bill.”

Sen. Kelly Ayotte, New Hampshire Republican, wasn’t willing to wait until next year, calling on Congress to find another place to cut before leaving Washington for the holidays.

“Let’s take a moment in this body, stop trying to rush out of town for the holidays and work together to come up with replacement [money],” she tweeted Tuesday afternoon. “Fixing this legislation shouldn’t be too much to ask of ourselves — we are blessed in this country because of our men and women in uniform.”