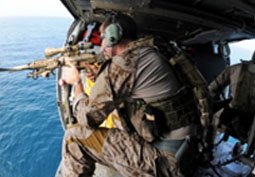 These are dark days for the U.S. military, which is being hit hard by sequestration-induced budget cuts. Readiness levels are falling and, if sequestration isn’t turned off, this could be only the beginning of the pain. So those of us who care about a strong defense and the well being of our armed forces have to take our solace where we can find it. In my case I’m finding it in a darkened theater watching movies such as “Zero Dark Thirty” and “Captain Phillips” and the forthcoming “Lone Survivor” which depict the U.S. military’s elite units at their best.

I haven’t actually seen “Lone Survivor,” which is not out yet, but like the others it’s a story of the Navy SEALs, in this case of a mission in Afghanistan that went horribly wrong, resulting in the death of three out of four men who were on the objective along with a helicopter-full of reinforcements. It is obviously different from the other two movies in that the SEALs didn’t achieve their objective but they did fight heroically and skillfully against great odds, and I am sure the movie will do their deeds of valor justice.

As for “Zero Dark Thirty” and “Captain Phillips,” they are virtual SEAL propaganda films, all the more potent because that is not what they were intended to be. They were, and are, accurate depictions of real life missions–in one case, killing Osama bin Laden, in the other rescuing a merchant marine skipper held hostage by Somali pirates. In both cases the SEALs are not named and not delineated individually but their competence and skill shines through.

What is even more impressive is how the movie shows the SEALs acting completely unemotionally as if there were an ordinary day at the office for them, which in some sense it was. The snipers quietly repack their rifles and other gear and walk away like gunslingers in some Western.

I can only hope that “Captain Phillips” and other movies will receive wide airing abroad because nothing will inculcate respect for America more than for foreigners to see these movies with their displays of almost superhuman skill on the part of our armed forces. Everyone knows the U.S. has the best and most expensive military equipment but these movies show our true secret is the great skill and dedication of our men and women in uniform. If only Congress would keep faith with them by providing the funding they need to continue defending us.