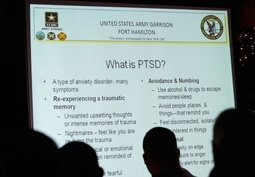 Listen to the story on NPR here.

The Military and the Department of Veterans Affairs say they want more veterans and servicemembers to get appropriate treatment for post-traumatic stress disorder, or PTSD.

That’s why they’re tweaking the way they define and treat PTSD. But if this approach works, it could add to the backlog of PTSD cases.

For years, the standard definition for post-traumatic stress disorder had a key feature that didn’t fit for the Military. It said that the standard victim responds to the trauma he or she has experienced with “helplessness and fear.”

Elspeth Cameron Ritchie, a former psychiatrist with the Army, says that may be true for civilians. But, she says, military people are trained to do just the opposite.

“When the IED, the improvised explosive device, goes off, they pick up their weapon, lay down suppressing fire, drag their buddies into safety and go on about doing what they’re trained to do,” she says.

New Army guidance says, don’t expect Military men and women to respond to trauma this way. Even if they are “soldiering through” the pain, they may still need treatment for post-traumatic stress.

This is just one of a number of adjustments the Military and the VA are making — they’re essentially giving the benefit of the doubt to people who show signs of stress.

Ritchie says opening up the definition will allow more servicemembers to get treatment.

“So that you bring in people who are doing exactly what they’ve been trained to do and make sure they get the care and treatment they need,” she says.

The new Army guidance clarifies other pieces of the PTSD diagnosis that might mean one thing for civilians, and something completely different in the Military.

Take “malingering,” or faking illness. Dr. Charles Hoge of the Army Surgeon General’s office says that for a servicemember, that word could lead to denial of benefits, or even punishment.

“These are legitimate diagnoses, but they do have different implications and ramifications in the Military because of the administrative processes that can happen around those types of diagnoses,” he says.

Through these changes, the Army and the Department of Veterans Affairs are hoping to peel away the stigma still associated with this condition. In doing so, there’s also a good chance that more people will seek treatment. And that could add to the growing number of PTSD cases in the Military.

The VA recently announced it will hire more therapists, doctors and support staff, in an effort to shorten the long wait times for an appointment in some places.

Dr. Mary Schohn, director of mental health operations at the VA, says rural areas are a particular problem. So the agency is sponsoring special training internships.

“So some of the last internship positions that have opened up have been in rural areas because we know that people who tend to train in areas are more likely to stay there,” she says.

But some say no amount of hiring can keep pace with the growing number of cases.

“There aren’t enough therapists in our country to deal with the number of individuals coming back with traumatic stress symptoms,” says Elaine Miller-Karas, director of the Trauma Resource Institute, based on the West Coast.

Miller-Karas says that simply rounding up enough psychiatrists and therapists for all these men and women isn’t enough. Alternative approaches are essential, she says — relaxation techniques, exercise and other ways to help people who don’t want to be labeled with a disorder.

“Many of our young men and women coming back don’t want to go to a mental health therapist. But they will go someplace and learn skills for wellness to increase their resiliency,” she says. Miller-Karas is focusing on training community health workers and family members in coping with post-traumatic stress.

Hoge of the Army’s Surgeon General’s office says clinicians usually turn to traditional talk therapy and medication first because they’ve been tested. “But if they don’t work, clinicians will very often move to treatments that don’t have as strong evidence,” he says.

Proven or not, alternative therapies may be needed to manage the workload created by all the troops seeking help.

Troops’ Mental Health: How Much Is Unknown?