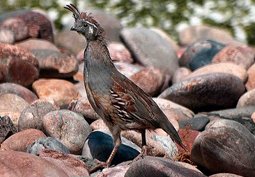 Quail eggs are like fingerprints, a new study suggests.

The creamy blue-and-brown speckled eggs, splashed like a toddler’s art project, vary among birds but are consistently patterned for individuals.

What’s more, in a laboratory experiment, quail camouflaged their eggs according to their personal pattern, picking lighter sand for less-speckled eggs and darker sand for eggs with more brown splotches. What surprised researchers was the discovery that quail changed their approach to camouflage as their eggs got darker.

“It’s as if they knew the characteristics of their own eggs and chose the best substrate with which to lay them,” said George Lovell, lead study author and an expert on animal camouflage at Abertay University and the University of St. Andrews in Scotland.

Sitting at the bottom of the food chain, with a spot on just about every predator’s dinner menu, quail and their eggs need good hiding places.

In the experiment, quail could lay clutches in sand with white, yellow, red or black hues. Researchers photographed each spot where the quail laid eggs and each location they ignored. The images revealed whether quail moms picked the sand color that offered the most camouflage. “They did really, really well,” Lovell told OurAmazingPlanet.

More than 50 percent of the time, quail chose the sand color offering the best or second-best protection for their own egg pattern, the study found.The findings appear today (Jan. 17) in the journal Current Biology.

“The amazing thing is this change in strategy for the different eggs,” Lovell said.

Quail with the creamiest egg colors picked white or yellow sand. This strategy, called background matching, aims to hide the eggs by blending into a similarly-colored background.

Quail with darker, more splotchy eggs conceal their eggs not by matching a background color, but by trying to break up the egg’s outline through its color pattern, an approach called disruptive coloration. The same strategy the military uses in its camouflage patterning, the egg splotches disrupt its own outline with the colors and patterns on its shell, Lovell explained.

“What the spots seem to be doing it making a predator think an egg is different from an egg shape,” he said.

The quail were raised in captivity at the University of Glasgow in Scotland, and had seen their eggs before the experiment started.

“It’s possible that they learn the patterning through seeing eggs that they’ve laid,” Lovell said. “In the wild, there is some evidence that birds are often less successful with their first clutch of eggs. It may be that at that point in time, they’re not able to select the best place to lay their eggs.”

The shell color comes from two pigments: blue-green biliverdin and red-brown protoporphyrin, which are both breakdown products of hemoglobin (the oxygen-carrying protein found in the red blood cells of all vertebrates).