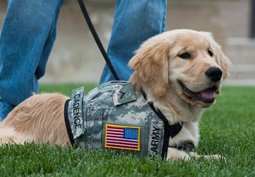 For years, I’ve written articles about the power therapy dogs have over people with dementia, loneliness and behavioral problems. My own sweet Springer Spaniel was a certified service dog I’d take to nursing homes.

Of course, you don’t have to have any of those issues to find them comforting. (When my father was dying, he asked for my dog.)

So my human ears perked up when I read that a federal regulation that went into effect last week still does not fund service dogs for veterans with mental health issues like PTSD, triggered by an event such as combat. The only time it is covered is if the vet also has a visual, hearing, or mobility impairment.

Yet PTSD among vets is pervasive. In fiscal year 2011, 476,515 vets with a confirmed PTSD diagnosis received treatment in VA medical centers and clinics. This number has risen yearly — in FY 2006, 271,976 vets were treated in VA centers. These figures include veterans from all eras.

And, those are just the figures for those who sought treatment. According to a report from the Institute of Medicine of the National Academies, 13-20 percent of the 2.6 million vets who served in Iraq or Afghanistan since 2001 may have PTSD.

A national study assessing the benefits of providing service dogs to vets with mental health conditions (think PTSD) has suffered a setback. Background first: The National Defense Authorization Act for Fiscal Year 2010 had charged the Department of Veterans Affairs with conducting that research study. The VA chose the Tampa VA Medical Center as the study site.

Currently, 17 vets have been paired with service dogs participating in the study. The VA will continue to follow this group. That’s good. But any new pairings of PTSD vets and dogs has been suspended. According to Mark Ballesteros, a VA spokesman, it’s because of “concerns for the health of the dogs at the vendor’s facility and other contract violations. We are working on a new plan to carry out this research with additional pairings potentially in multiple locations.”

That is making a lot of people who run in therapy dog circles unhappy. Here’s the reaction from the American Humane Association: “With the epidemic of suicide rates for returning veterans, many of whom suffer from post-traumatic stress disorder, we need to provide alternative therapies for healing from the stresses of the battlefield,” says AHA President and CEO Robin Ganzert.

And the response from Amy McCullough, AHA’s national director of animal-assisted therapy: “Studies show that interacting with dogs has a positive psychosocial effect on people with psychiatric disorders. Animals are sources of comfort and companionship, and PTSD service dogs are trained to perform specific tasks in order to help their owners manage their PTSD symptoms.”

The suspension of additional service dogs for the VA study will undoubtedly delay data and results likely to show their value. And that means Uncle Sam will not be picking up the tab for vets with mental health conditions who may be helped by service dogs anytime soon.