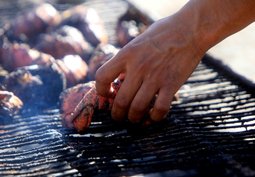 COMBAT OUTPOST FIDDLERS GREEN, Afghanistan, Oct. 2, 2012 – When Staff Sgt. Juan Contreras first joined the Marine Corps, he had no idea where that journey would lead him.

“I decided to join the Marine Corps as an administration clerk during my first enlistment,” said Contreras, from Santa Ana, Calif. “Sixty days prior to getting out of the Marine Corps, I was sent to go do mess duty. During that time, the chief mess cook got me to start helping out with cooking, and I picked it up quick. Then two weeks before I was supposed to get out, I submitted a package to switch jobs, and I got approved to be an actual food service guy. I don’t regret that decision at all, either. I’ve really enjoyed my time in food service.”

Contreras enlisted in the Marine Corps at 18. Nineteen years later, he’s serving on his fifth combat deployment. Contreras has also been a part of three humanitarian assistance missions while attached to a Marine expeditionary unit.

“Every deployment I’ve gone on is based off of what my grandfather, who was prior military, told me,” he said. “He used to say that all veterans’ cemeteries are full of honorable and courageous people, not cowards,” Contreras said. “So that’s the reason I always go where I go. That’s what makes me come out here.”

During his previous deployments, Contreras was with infantry units or with a regimental combat team. During this three-month deployment, his last before he retires next year, Contreras travels from one base to another, ensuring Marines are getting the proper nutrition.

“I look at this deployment as a gift, to be able to go to all these bases and see what direction the job is going since I came into it,” Contreras said. “When I go to these bases, I sit down and look at all the orders the Marine who is cooking has. I make sure he’s ordering each thing Marines rate while they’re out here.

“I conduct sanitation classes, preventive maintenance of the equipment that they actually use to cook and inventories of everything they have,” he continued. “So I just go from place to place making sure they have everything they need to be set up for success.”

For Contreras, food service has the ability to change the attitudes at an entire base.

“Food service is the morale booster out at these [forward operating bases], because if you have bad food, people are going to have bad attitudes,” Contreras said. “So having a good cook with a good attitude creates a big difference. One thing that I try to do is boost the morale up when I come out to these places.”

Contreras’ love of cooking doesn’t stop with the Marine Corps. Once retired, he said, he plans on receiving an education in business management and opening a restaurant.

“Three years after my retirement, I plan on opening my own seafood restaurant around the San Diego area,” Contreras said. “Ten or 15 years down the road, I see myself opening up another one or two restaurants. I’d like to have a least two restaurants with the same name and same menu.”

Contreras credits his drive and his love for cooking to family members.

“I got my hard work ethic from my dad, and I got all the discipline from my grandfather,” Contreras said. “I inherited the cooking skills from my mom. Everything just comes natural for me. I know all the armed forces recipe cards off the top of my head. If there’s a product with 50 ingredients in it, I can tell you right away if you’re missing one thing or if anything’s wrong with it.”

“He has a lot of knowledge. He’s a great staff non-commissioned officer, and you’ll really learn a lot from him,” said Marine Corps Sgt. Tony Pressley, also with the food service contact team. “Just being able to work with him has been a great experience. He’s done a lot throughout the years, and he knows what he’s doing. He’s someone who has kind of helped mould me the way I am today, so it’s been a great experience.”