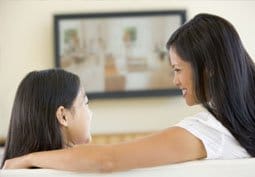 The other day while I was driving the car, I heard my two daughters talking in the back seat about Thanksgiving:

“So first, we’ll watch the Macy’s parade while looking at newspaper ads, then we’ll help deliver the turkey dinners for church, then we’ll go to Aunt Cheryl’s house to eat.”

Next, they covered Christmas:

“On Christmas Eve after we sing, we’ll eat at our house, then everyone will go home. Christmas morning we’ll open our Santa gifts, then drive to Aunt Cheryl’s lake, open gifts and eat breakfast. Then we can ice skate on the lake.”

What I learned, aside from A) My daughters are excessive planners, and B) Aunt Cheryl often bears the brunt of feeding my brood, is that my kids have learned to value tradition.

Tradition. I can’t type that word without thinking of Tevye belting it out in “Fiddler on the Roof.” But despite Tevye’s overstated treatment of the word, I’ve come to realize tradition can involve the most simple of rituals for children.

Sometimes, it’s the simplest of traditions with our kids that make me smile the most. And in this case, when I say “kids,” I mean my niece and nephew who were “my kids” long before my own children were born. They’re away at college now, but I still smile when I think of something my sister and I started every Friday when they were preschoolers: Burger and Fries Friday.

At the time, I didn’t go to work until 2 p.m. So every Friday, before I’d go to work, I’d stop at a fast food restaurant and bring lunch over to my sister’s place. She was a stay-at-home mom of two little ones, and I know she liked the adult conversation.

We’d all sit down and catch up on each other’s days. My sister and I would talk jobs and social lives, and the kids would talk about whatever was on their mind that day. I remember having great conversations about which Spice Girl I’d most like to be (Ginger).

I still smile when I think about their cute little ketchup-covered faces (my niece’s and nephew’s, not The Spice Girls’).

Almost by accident I’ve started a similar tradition with my children. A couple of years ago, my husband was out of town for work. Trying to think of something fun to do, I suggested we go to a drive thru, pick up food and have a picnic on the living room floor while we watched a movie.

It just happened that we picked KFC that night. We had a good time. But I didn’t think much of it. Months later, when my husband went out of town again, my daughter came to me and said, “Are we having a chicken picnic and watching movies again?”

How could I say no to that? We’ve done it now for the last few years every time Mark goes out of town, which thankfully for my waistline isn’t that often.

It has come to be known as “Chicks with Chicken” night. I hate to say we look forward to Mark going out of town, because certainly that’s not the case. But it’s definitely the positive side of having him away.

I’ve come to realize you can plan traditions and hope they stick, but more often the traditions and rituals we share with our children develop more naturally. They aren’t forced. They’re a natural extension of the joy you have in just being together, and very often, in my case, include ketchup.

Tracy Briggs is a mother of two and is an employee of Forum Communications Co.

What are your favorite family traditions?