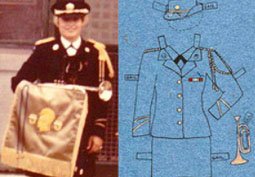 The story of American women can be told through paper dolls.

From the Victorian wedding costumes favored by brides in the late 1880s to the flight attendant uniforms from the 1940s (when commercial air travel was becoming popularized and women were still called stewardesses) to the belted pantsuit of the 1970s, paper dolls trace the history of women’s fashion and professional evolution in American life.

Now, a new art project is exploring the cultural significance of women’s military uniforms at a time when women’s combat roles are increasing after a decade of war.

It is the brainchild of Pam DeLuco, 46, a bookkeeper, papermaker, scavenger and artist who uses everyday materials. She was inspired by the paper fashioned from uniforms used by the artist Drew Cameron — a founder of the Combat Paper Project, which teaches veterans to make paper from their uniforms — and the stories Ms. DeLuco heard from female veterans during a volunteer project with veterans about their emotional tie to their clothing.

“The Coast Guard has this tradition of throwing your boots overboard when you pass the Golden Gate Bridge,” Ms. DeLuco said. “And I met one woman who had a discipline issue and was not permitted to do this, and was so sad. That incident made me realize then that this book was a way for women to tell about their service and their traditions. A lot of times, we can’t understand those experiences of women in the military and don’t have access to them. I chose paper dolls because it made it all feel more accessible.”

Ms. DeLuco got the word out among female veterans, who came forward by the dozens to donate their uniforms and accessories. “The most moving story came from a retired Navy chief who had been fitted for that particular uniform with her mentor, which is this beautiful Navy tradition,” Ms. DeLuco said. “For her to donate that uniform that meant so much to her still makes me emotional.”

The ensuing two-book project, produced by Shotwell Paper Mill in San Francisco, includes a paper doll and uniforms fashioned from the cloth from donated military uniforms, accompanied by accounts from women in the armed services.

Women have been depicted in military roles in paper dolls sporadically throughout history, like the Women’s Auxiliary Ferrying Squadron and military nurses. But “anyone who adds something new now is advancing this,” said Judy M. Johnson, a paper-doll artist and a publisher of restored and republished vintage paper dolls. “She has really personalized it with those uniforms and using real people and their uniforms.”

Military uniforms become paper when they are stripped of their buttons, zippers and emblems and cut it into postage-stamp-size pieces, mixed with cotton squares and water and beaten into a pulp, then turned out into molds that eventually turn out paper sheets.

Ms. DeLuco said she had very little exposure to women in the military before the project, and her notions of them evolved with the project. “I had always thought of someone in the military as someone really hardened and macho, even the women,” she said. “But making art with them made them really appear sensitive to me, and I was struck with that overwhelming feeling that they see the world as I do.”