Our Hearts of Darkness 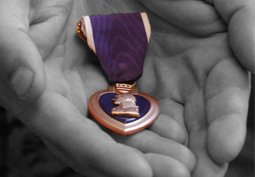 There are moments in life when the darker side of human nature makes itself known in the everyday and the commonplace. At these times, long-held assumptions about human decency can vanish in an instant and leave us with a clear-eyed, but disturbed sense of reality.

It is the moment when, with the sharpest vision and presence of mind, there is no doubt that what we have just witnessed is ugly and true at the same time.

While waiting for my delayed flight from Tampa to New York, sitting in the boarding area in my usual heads-down reading posture, I was briefly interrupted as I saw a wheelchair come into my peripheral field of vision. Some rapid-fire, automated memory mechanism wordlessly communicated to me that was the usual and often – seen senior citizen being helped along to our gate. The mechanism was wrong.

As I raised my head I could see that this was a young Marine, sitting ramrod straight in his military-issued wheelchair, legless from the hips and showing the remnants of third degree burns on his deeply scarred arms, the right one badly disfigured. Prominently centered on the back of the chair was the Marine Corps insignia and around it the words “Purple Heart Veteran.”

I had just had a long discussion the night before with a business colleague from California about war and US foreign policy and was in a circumspect mood. I had expressed my deep frustration with the lack of awareness of most citizens of the depth of trouble that war brings.

We discussed the chronic under reporting of civilian casualties, the rampant illegality excused in the name of “protecting our freedom,” the monstrously large defense budget, the devastating costs to our veterans and their families, the continuing escalation of international conflict and the recent NYU-Stanford Law School collaborative study on the devastating human toll of the current Drone War in Waziristan, Pakistan.

Overcome with emotion, it took me several minutes to compose myself enough to approach and offer this young man a smile and a “thank you.” It was obvious that he was avoiding eye contact with people, including the flight attendant who was speaking to him with kind, gentle words and gestures of assurance. I thought she was an angel.

As we boarded the plane, the first class section was full and all were seated, many gazing at me, the 6-foot tall man standing before the galley. The young Marine was already seated in the coach section. I looked at the Angel and she looked at me. Our eyes locked. In a strong voice I said, “That kid belongs in first class, someone should give up their seat.”

I turned and looked at my fellow citizens seated in front of me and heard the flight attendant second my motion and also state that the young man was only 23 years old. She said, “I know you’d give up yours.”

I thought, that’ll do it and stood for a moment longer. Everyone either looked away or looked down. I gazed ahead and at the young Marine and could see that he must have heard me. He looked down as well. With everyone in my view looking down, warrior and civilians, I felt my heart begin to race with waves of injustice rising in my gut.

Before I could utter a second louder protestation I thought of the young man. This was about him. It was also about respect. Creating a scene would embarrass him I thought and would be an affront to his dignity.

He had not asked for a better seat and had lived, seen and experienced things that none of us could even imagine. No burden lay with him. It lay only with my fellow citizens and me. I moved on slowly to my seat. I could feel the massive weight of what just happened hanging in the air. Was I the only one feeling it? Could others escape away into their iPhones and newspapers? Did they not at least momentarily reflect? Did no one at all feel compelled enough, even after some moments of uncomfortable soul searching, to simply get up out of his or her seat? Such a simple and utterly modest sacrifice….

As we flew to New York, the flight activities proceeded as typical flights do with safety announcements and basic drink service. The young soldier and his circumstances occupied my mind the entire time. I began to weep. I could think of nothing else. I peered forward looking for the top of his bright blond crew cut. Did someone finally give up their seat? Yes, perhaps I missed it. Someone did the right thing.

As the flight attendants serving the coach section made their way back to me, I ordered club soda and peanuts. I had been wiping tears away from my eyes and trying not to allow my emotions to overtake me. As my flight attendant, a man of military bearing himself, poured my drink I asked, “did someone finally give their seat to that young man?”

I looked up at him and he could see that I had been crying. ‘What the f—- is wrong with people?,” I asked. I hadn’t expected to blurt out vulgarity and for a moment, felt a little embarrassed.

Slowly, he shook his head.

The angel flight attendant who was now serving first class moved back down the aisle toward us. She hurriedly asked the man serving my drink, “do you have any vodka; I need five? They’re all drinking it and I’m out.” He reached below his cart and pulled out five bottles and she took them away.

I do not know what the conscience of another is. I can only speculate. I see so many bumper stickers reading “Support our Troops”, that I have been led to believe, perhaps naively, that most people really care about them and understand the meaning of their sacrifice.

Faced with a choice, I opt for the notion that at least some of the folks ordering drinks, were doing so to quell an uneasy feeling that had overcome them. Perhaps they weren’t aware of what was making them uncomfortable and sometime later, it would become apparent.

And then, with the full measure of time and distance between themselves and the young Marine they would come to realize that they had made a terrible mistake. That something which seemed trivial was actually profound; that the silent young man with the Purple Heart lives a life that is defined by sacrifice. That when given the wonderful opportunity to make the most meager sacrifice for him, to offer him their gratitude, their love, the simple recognition that they were grateful for his service and their own lives of luxury, they did nothing.

And that in this awareness, they will grieve for this soldier’s physical loss and emotional suffering and the many more like him and those who have died. And perhaps they will grieve as I am for a country that has lost its way in a culture of self-centeredness and willful ignorance of its own heart and soul.

It is in our best interest to hope for the emergence of the non-selfish parts of our character, in others and in ourselves.

At times like this, it is difficult to make such a leap of optimism, but I have to believe that what is good in all of us only needs to be touched by awareness to make it operative in our lives, that our hearts of darkness can become hearts of light.