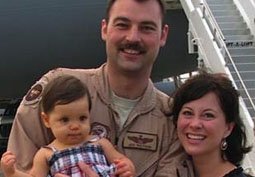 She’s expecting a baby. Her partner, meanwhile, is expecting to be deployed overseas. For many expectant military spouses this spring, swollen ankles and morning sickness are the least of their worries, as they prepare to deliver and parent a newborn, with their spouses thousands of miles away.

But one organization called Operation Shower wants to make sure that pregnant military moms know just how much civilians appreciate the challenges they face, by throwing them a top-of-the-line baby shower that would thrill any mom-to-be. Since 2007, the non-profit based in Missouri has honored more than 1,000 women and families with elaborate baby showers, hosted monthly for military spouses and pregnant mothers on active duty across the country, in all branches of the armed forces.

Inspired by her uncle, who was deployed for the first six months of his son Isaac’s life, Leanne Morrissey founded Operation Shower six years ago as a way to give back to spouses in the same position as her aunt, who was alone with three children during Isaac’s infancy.

“My goal is for these women to really feel the love that their country has for them when they leave the shower and to help ease the first year of having a new baby in some way,” explained Morrissey.

Earlier this month, Operation Shower hosted 40 military moms in Somerset, N.J., with a three-course meal, diaper-themed centerpieces, and a rubber-ducky raffle for military spouses to win baby monitors and bouncy seats. Each mom left with over $1,200 worth of dream baby items provided by Toys R Us: a lightweight Scope stroller, top-of-the-line crib from Delta, Safety 1st car seat, $100 gift card and a “shower in a box” full of baby essentials like bibs, bottles, and bottles, as well as diapers and toys donated from companies and civilians across the country.

One of the women honored at the New Jersey event was Marit Watson, who is married to Air Force pilot, Joseph Watson. She was alone in the delivery room for the birth of their first child, Helen, a little girl the couple adopted from Kansas almost two years ago. Her husband wasn’t able to get away from his training at the McGuire-Dix base in New Jersey, and didn’t meet his daughter until she was already 8 weeks old.

Now, Watson is pregnant with twin girls due in September. But this time, she hopes her husband will be able to share the birth of their second and third children, and won’t be called away before she goes into labor.

“Recently, my husband saw these tiny diapers,” said Watson, “and he was totally shocked by how tiny a real infant is at the beginning. He had never seen our daughter so little.”

Another military mom-to-be, Krista Carlson, expressed her gratitude while marveling at the contents of her “shower in a box.”

“This is so thoughtful and considerate that everyone is doing this for us and saying thank you to us this way,” said Carlson, whose first baby is due on June 25, while her husband, Corey Carlson, a Staff Sargent in the Marine Corp, is scheduled to leave shortly for his fourth deployment. They plan to name their little boy Mason. “My family is all on the west coast,” explained Carlson, who will take care of their child on her own for the first six months of his life. “So I’m not sure who I will have in the delivery room with me, probably my boss or co-worker.”

While those in uniform may get acknowledged or thanked more frequently by the public, many spouses go unnoticed, said Justin Ashjian, a family readiness non-commissioned officer with the Military and Family Support Center at the joint McGuire-Dix-Lakehurst base in New Jersey. Ashijan is also a military spouse himself, who knows firsthand what it’s like care for two little kids when your husband (or in his case, wife) is deployed for several months at a time.

“There’s all this training in the military,” Ashjian pointed out. “But there’s no real training to be a military mom.”

Gina Rich, a single mom and master sergeant who also works at McGuire-Dix-Lakehurst’s Military and Family Support Center, also attended the New Jersey shower. Rich remembers how hard it was when she, herself, was deployed for four months to Soto Cano Air Base in Honduras. Her daughter, Teagen, was only 14 months old at the time, and stayed with an aunt in West Caldwell, N.J.

“People might not realize it, but these showers do mean a lot to moms,” said Rich, who missed her little girl’s first Mother’s Day. “We feel the support here and it does make a big difference to us.”