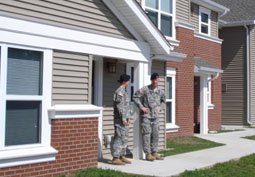 Defense officials will soon cut funding for a program that helps connect service members and their families with available rental housing at their new duty stations.

If the program remains active, it would continue as it does now, at no charge to service members and their families. The company is exploring alternatives for funding the site, such as sponsorships or advertising.

The Defense and Homeland Security departments “are ending sponsorship of AHRN because the contract is expiring,” said Patrick Foughty, a spokesman for Navy Installations Command. DHS is involved because Coast Guard installations are included in the program.

Foughty said plans are in the works for DoD-sponsored rental listings at military housing centers, and officials are working to identify a solution for a government-sponsored online listing that would be available in the coming months.

Information was not immediately available from DoD or the Navy about the specific reasons for ending the contract.

AHRN operates at all continental Army, Air Force, Marine Corps, Navy and Coast Guard installations. Overseas, it operates at Air Force and Army sites in Europe and Air Force sites in the Pacific. AHRN was established by DoD in 2004; the Navy administers the contract.

The listings include privatized housing as well as many rentals in local communities. The site has a feature that allows troops to search for rental listings that fall within a 25 percent range of their Basic Allowance for Housing rate.

Many of the rental property listings are vetted by military housing office personnel; it is not known whether that will continue once the contract ends.

Troops also may list their own properties for rent or sale on AHRN, for free.

Information was not immediately available about the cost of the AHRN contract.