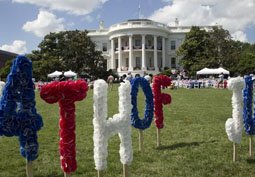 Millions of Americans spent July Fourth at barbecues in backyards across the nation, including the most famous backyard of them all.

Members of the military and their families converged on the south lawn of the White House on Thursday as President Obama continued an historical tradition of honoring the nation’s armed forces on Independence Day.

“We are incredibly grateful for your service,” Obama told his guests.

As the nation celebrates its independence, it especially appreciates those “who are willing to fight” for the ideals of the American Revolution that began with Declaration of Independence in 1776, the president said.

Obama also told the crowd he has an extra-special reason for celebrating July Fourth: It is daughter Malia’s birthday.

Earlier, in a holiday radio address, Obama said the men and women of the military have played “a vital role in the story of our nation” and the history of the globe.

“People in scattered corners of the world are living in peace today, free to write their own futures, because of you,” Obama said. “We are grateful for your service and your sacrifice, especially those still serving in harm’s way and your families here at home.”

In addition to enjoying food and music from military bands, Obama and his guests planned to watch the annual Washington fireworks show from the White House lawn.

The USO co-sponsored the fifth annual “Salute to the Military” concert event at the White House.

Obama, who hosted these picnics for military families throughout his first term, told them in 2012: “All of you represent what is best in America.”

James Heintze, librarian emeritus at American University, has tracked July Fourth activities of all the presidents, and said the commanders in chief usually spend the day honoring the nation’s heritage and “those who have fought for us in the wars we’ve had.”

The tradition of welcoming members of the public to the White House on the Fourth of July goes back to actual author of the Declaration of Independence: President Thomas Jefferson hosted a holiday reception at the executive mansion in 1801.

In olden times, members of the general public could visit the White House on the holiday. Nowadays, given the growth in the power of the presidency and the needs of tighter security, only invited guests celebrate the day with the chief executive.

In 1861, President Abraham Lincoln called an “extraordinary” special session of Congress on July Fourth to prepare for the Civil War, less than three months after the battle at Fort Sumter.

Franklin D. Roosevelt’s activities included speeches, a radio address, and a press conference, many designed in part to rally the nation before and during World War II.

In the 21st century, presidents George W. Bush and Obama have cited the struggle against terrorism in Independence Day remarks.

“Presidents try to reflect what Americans are thinking,” Heintze said.

Independence Day has also been a sad anniversary in presidential history. Both Jefferson and presidential predecessor John Adams, among the most prominent of the nation’s founders, died on July 4, 1826 — 50 years after the Declaration of Independence.

In 1850, President Zachary Taylor attended a July Fourth ceremony at the Washington Monument. After snacking on large quantities of cherries and iced milk on a very hot day, Taylor fell ill and died days later.

In remarks at last year’s barbecue, Obama saluted “the 9/11 Generation,” and cited the winding down of combat operations in Iraq and Afghanistan.

“As long as I have the honor of being your commander in chief,” Obama said, “I want you all — our men and women in uniform, our veterans and their families — to know this: America will always remember.”