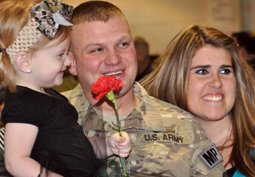 By Stacy A. Anderson

WASHINGTON — Madeline Stevens knows what it’s like to be a military brat.

“The first week of school, it’s really hard,” said Stevens, a 17-year-old from Jacksonville, Fla., who has moved eight times with her naval aviator father and attended 10 different schools. “You sit by yourself at lunch, you try and make friends in classes. When you’re younger it’s easier because, you know, you just share crayons, and you’re new best friends.”

But in high school Stevens said she’s had to integrate herself into sports and clubs to make friends, many of whom already have known each other most of their lives. The shuffle also has been a strain academically.

Moving can be tough for any child, but it can be even harder for children of military families, who, like Stevens, may relocate more frequently. They must leave friends behind and get acclimated to new schools that may have a different curriculum than the one they left behind. And the emotional impact of having a deployed parent can also include worry and anxiety, said Mary Ann Rafoth, dean of Robert Morris University’s School of Education and Social Sciences.

“Most of us go through each day not realizing that we’re a nation at war. But those kids do,” she said. “They often feel like they’re carrying that burden alone.”

However, educators often don’t have the tools to help military children cope.

The Obama administration has partnered with the American Association of Colleges for Teacher Education and the Military Child Education Coalition to help military children as they face social, emotional and learning challenges in the classroom while having an active-duty parent.

The guidelines also encourage the colleges to work with admissions offices to identify military children, offer workshops and seminars to faculty and student teachers, and partner with K-12 schools for joint development programs.

There are nearly 2 million students whose parents are either on active duty, members of the National Guard or Reserves or military veterans, according to the Military Child Education Coalition. Students often move six to nine times during their preschool through high school education. More than 80 percent of the 1.1 million-plus K-12 students attend public schools.

Biden said she was moved by a story of a little girl who burst into tears when “Ave Maria” played at her school’s Christmas program because the song had also been played at the funeral of father, who died in Iraq.

“It was so shocking to me that that teacher really was unaware that this girl had a daddy who was in the military,” she said. “We have to make sure that we can identify the military children and that we can do things to celebrate military families.”

Biden said it was inevitable that the education of military children would become part of Joining Forces, the initiative she launched with Mrs. Obama in 2011 to support military families. The campaign also has helped formerly deployed soldiers seek employment stateside and has aided spouses.

“We say, when you have a family member who is in the military service, the families serve too,” she said. “Think of the pressures on the families, and so they’re all in this together.”

Robert Morris University, located in Moon Township, Pa., near Pittsburgh, serves a large community of the military children with the nearby Air Force Reserve base. All education majors at Robert Morris attend weekly seminars to discuss the challenges of student teaching with their school faculty. Starting this semester, one of the sessions will be devoted to discussing the needs of children with parents in the military who are deployed, state-side or veterans.

Rafoth, who will lead the session, said the constant moving can cause “holes in instruction,” rather than cognitive issues for the student.

“This especially happens with math instruction because math curricula vary place to place, and it’s possible you can go around and never get fractions because those are taught in a discrete place in the curriculum,” she said. “Then, boy, are you up a creek when you meet algebra.”

Almost 10 percent of the 24,000 students at Kansas State University are military-connected since there are three military bases in the state.

The university’s College of Education will hold a special session on the needs of the military-connected families at its educational symposium, an annual career day for about 500 students. The school also will incorporate information about military children into a required teaching course, Core Teaching Skills, about effective teaching and learning.

Debbie Mercer, the college’s dean, said military children deal with anxiety and fear of the unknown. Those issues can manifest in the classroom with a student becoming withdrawn or acting out, she said.

“Being able to reach that child where they are, help figure out exactly what is going on and then come up with a plan for that child is important,” she said.