Norovirus Bug on the Rise 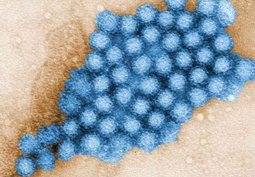 Although the flu is on everyone’s minds this season, the winter vomiting bug, or the norovirus, is making its rounds. The U.S. Centers for Disease Control and Prevention (CDC) reports that the norovirus causes about 70,000 hospitalizations and 800 deaths each year, mostly in young children and the elderly.

Some of the virus’ common symptoms include nausea, vomiting, diarrhea and stomach pains. The CDC points out that the norovirus is often referred to as the stomach flu, but it is unrelated to influenza.

A new norovirus strain, GII.4 Sydney, was detected last year in Australia. The strain hit the U.K and sickened over a million people. It has now reached the United States and this new strain appears to be taking over.  Of norovirus cases reported from September to December, 54 percent have been identified as GII.4 Sydney, according to recently released data.

The first norovirus outbreak was reported in Ohio in 1968. Today, approximately 21 million illnesses are attributable to norovirus in the U.S. each year, reports the CDC. Of those, approximately 25 percent can be attributed to foodborne transmissions. The norovirus can also spread quickly in closed places like daycare centers, nursing homes, schools, and cruise ships.

This hearty virus is extremely contagious. The BBC reports that norovirus is one of the few infections you can catch from a toilet seat. The virus can survive temperatures as high as 140°F, which makes eating raw fish such as oysters, particularly dangerous.

Noroviruses can live in vomit or stool even before a person experiences symptoms, and up to two weeks after symptoms disappear. People are most contagious when they experience symptoms and during the first three days after recovery, reports the CDC.

There is no treatment or vaccine against norovirus. To help prevent contamination, the CDC recommends the following tips:

5 Tips to Prevent Norovirus From Spreading

3. When you are sick, do not prepare food or care for others