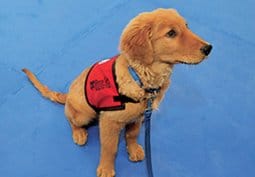 Dr. Cynthia Otto watches as two paws dig through dusty rubble. A well-trained nose slips between broken pieces of concrete, searching for any sign of life. The detection dog is committed to finding survivors and works tirelessly into the night, well after the large flood lights have come on at Ground Zero.

Dr. Otto is a veterinarian who specializes in emergency, critical care, and disaster medicine. After her experience working with detection dogs at Ground Zero and consulting with the military about the health of search-and-rescue dogs, she is certain that detection dogs are invaluable.

“There are so many jobs now that dogs are being used for,” Otto tells NPR. “Originally it was kind of looked at as that patrol dog or the bomb-detection dog, but now they’re being used to find the IEDs (Improved Explosive Devices). Some of them are actually being used for therapy in the field, which is really incredible. But they’re starting to look at all of the different potential components that these dogs can contribute to…and the detection area is so important because these dogs are better than any machine that we have — and they can save lives.”

A working dog isn’t your typical four-legged buddy; they are highly and specifically trained canines that perform unique and critical tasks that  save human lives. Historically, working dogs have served as messenger dogs during war time; helpmates to farmers in the fields;  helping hands to people with disabilities; and as patrol dogs protecting the ports and entryways of our nation. Detection dogs, sometimes called “sniffer dogs,” are those that use their sense of smell to identify particular odors (such as explosives, drugs or lost people).  New research shows a dog’s ability to identify infectious diseases, such as Salmonella, and even cancer.

With the United States national security under constant threat from attacks, detection dogs are still the best tool we have to detect and mitigate potential threats. Search dogs are also critical for the detection of victims of natural and man-made disasters.

Seeing first hand how these amazing canines help shape human lives, Dr.Otto established the Penn Vet Working Dog Center in 2007 as part of the University of Pennsylvania’s School of Veterinary Medicine. The center serves as a national research and development center for detection dogs. The goal of the center is to  increase collaborative research, scientific assessment, and shared knowledge and application of the newest scientific findings and veterinary expertise to optimize production of valuable detection dogs.

There is currently a shortage of highly trained working dogs in the US. Because of this, Dr. Otto has established the Puppy Foundation Program to lead the  way in responsibly breeding the best and healthiest of these important dogs. The program is special in the fact that it:

All of the dogs at the center are donated from kennels or breeders. While their breeds vary, Dr. Otto says it’s important that the dogs are no more than a few months old, so that the training can begin when they are impressionable, but not scared. “We’re interested in the health and performance,” she says. As a tribute to the dogs involved in the 9/11 search and rescue, each of the seven dogs in the first class has been named after a dog who worked at Ground Zero. The center, which is funded through charitable donations, has also matched the dogs with foster families who are Penn employees.

Find out how you can help here.

Not convinced that dogs are incredible creatures? Read inspiring stories here and learn more about the 9/11 rescue dogs here.