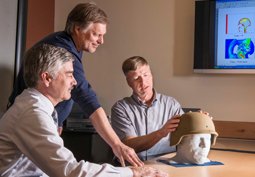 The Journal of Head Trauma Rehabilitation

Philadelphia, Pa. (January 22, 2013) – Researchers are making new strides in understanding the health consequences and treatment and rehabilitation needs of combat veterans and other service members affected by traumatic brain injury (TBI). The January-February issue of The Journal of Head Trauma Rehabilitation, official journal of the Brain Injury Association of America, is a special issue devoted to new research in military TBI. The journal is published by Lippincott Williams & Wilkins, a part of Wolters Kluwer Health.

“For the second consecutive year, we’ve expedited publication of new papers related to diagnosis, management, and rehabilitation of the many thousands of military personnel affected by TBI,” comments John D. Corrigan, PhD, ABPP, Editor-in-Chief of JHTR. Contributed by leading U.S. experts in brain injury and rehabilitation, the eight papers in the special issue address a wide range of aspects of military TBI—from combat to peacetime, and from active duty to many years after trauma.

There’s a pressing need for new research on military TBI—a problem with lasting consequences on the lives of thousands of Iraq and Afghanistan war veterans. It has been estimated that 19 percent of military personnel will sustain a TBI during combat deployment. Although most of these injuries are mild, some of those service members who incur a mild TBI will go on to develop a “post-concussive” syndrome, consisting of chronic cognitive, behavioral, and psychological problems.

Several papers in the special issue address associations of mild TBI with post-concussive symptoms and other co-occurring problems, including posttraumatic stress disorder (PTSD), depression, suicidal thoughts and behavior, and pain. Dr Corrigan comments, “The interplay of TBI, post-concussive symptoms, PTSD, depression, suicidality, pain, and substance abuse is the most challenging problem facing the Department of Defense and VA when treating service members with TBI.”

Other topics in the special issue include important associations of loss of consciousness, altered consciousness, or amnesia with the outcomes of TBI; factors associated with use of health care services by veterans with TBI; and the high rate of TBI among veterans seeking mental health services. The editors have also announced that a collection of the most popular articles on military TBI published in JHTR over the past three years has been made available free on the journal website. Dr Corrigan adds, “We hope these papers will help to increase awareness of TBI and its consequences among returning veterans, and spur further research into the most effective approaches to treatment and rehabilitation.”