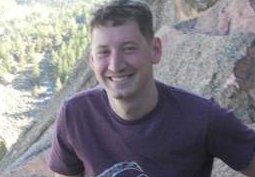 John Larimer wanted to save others from danger.

“John adamantly wanted to make a difference in the world, and he thought that his Military service would be the best chance for him to do so,” his girlfriend, Julia Vojtsek, 20 of Algonquin said Monday.

It was Vojtsek he ended up saving when a gunman burst into the Aurora, Colo., movie theater and opened fire last week.

Vojtsek described Monday how Larimer, the 27-year-old Sailor from Crystal Lake who was one of the 12 killed by the gunman, protected her.

“John and I were seated in the middle area. When the violence occurred, John immediately and instinctively covered me and brought me to the ground in order to protect me from any danger,” she said in a written statement given to the Sun-Times by her mother, Kelley Vojtsek.

“Moments later, John knowingly shielded me from a spray of gunshots. It was then, I believe, John was hit with a bullet that would have very possibly struck me. I feel very strongly that I was saved by John and his ultimate kindness.”

“He held my head tight and put his body in front of mine,” she told the station.

Vojtsek said Larimer was excited to see the new Batman movie at the Aurora theater. They’d heard people were going to see it in costume, so they stopped at a Walmart and he got a Batman T-shirt, mask and cape that he wore to the theater.

Vojtsek, a nursing student, and Larimer knew each other for six years but started dating only in the past three weeks. She was in Colorado because her father was working there.

She said Larimer, a Navy petty officer and cryptologic technician who had been stationed in Colorado since October, was “always putting himself before others.”

After the shooting started, she told WFLD, “I just stayed down as long as I could.”