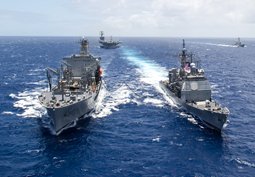 The U.S. Navy launched its Great Green Fleet recently at RIMPAC, the world’s largest naval exercise, which takes place biannually off the coast of Hawaii. Squadrons of F/A-18 Hornet fighter jets, an SH60-Seahawk helicopter, E-2 Hawkeye airborne early warning aircraft and other planes took off from the deck of the USS Nimitz, all powered by a biofuel blend, demonstrating, for the first time, biofuels in action at sea.

“The military has done a lot of things that starts a tidal wave throughout our culture, and I think this is one of those things,” Lt. Commander Jason Fox, a Hawkeye pilot, told Forbes.

The Navy has been testing biofuels for years, as part of a broader military effort to reduce vulnerability to oil prices and improve combat capability in general through renewable energy and efficiency. Naval Secretary Ray Mabus pointed out that the Navy got hit with a billion-dollar energy bill in May due to rising oil prices. He told reporters, “We simply have to figure out a way to get American made homegrown fuel that is stable in price, that is competitive with oil that we can use to compete with oil. If we don’t we’re still too vulnerable.”

The Navy is aiming to get 50 percent of its energy from renewable sources by 2020, and biofuels are an important part of that plan. However, the Navy’s expanded use of biofuels could have unintended consequences, depending on what kind of biofuels the Navy chooses. Done right, biofuels are a sustainable source of energy that can protect the environment and reduce carbon pollution without affecting food prices. But carelessly produced biofuels can actually increase global warming pollution and degrade our forests, soil, and water quality, and pose a threat to public health–hardly compatible with the military’s mission. Moreover, biofuels that degrade the land, soil, and water that sustain them will not deliver strategically meaningful volumes of alternative fuel for very long.

Working to increase the production of low-carbon, responsibly grown biofuels can give us environmental security and national security, by providing our military with a sustainable supply of domestic fuel, reducing global warming pollution, and helping our economy–and our nation–break free from the monopoly of oil. The launch of the Great Green Fleet demonstrates real leadership on the Navy’s part, and highlights the key role that the military can play in advancing groundbreaking technologies that transform the way we live.

The military essentially created the semiconductor industry, for example, by supporting early R&D and then making large purchases that brought down the cost of semiconductor manufacturing, eventually making it accessible to the broader civilian market. The military can play this transformative role again, by supporting biofuel supplies that can be replenished and sustained over the long term. That means ensuring the Navy’s biofuels are responsibly grown, low-carbon biofuels that provide maximum benefits for all Americans.