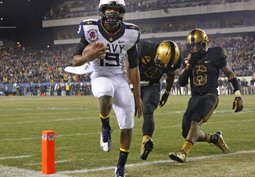 PHILADELPHIA – Trent Steelman walked off the field, about ready to burst into tears.

So many around him felt his pain. Army officials hugged him. Navy coach Ken Niumatalolo wrapped his arm around Steelman and told him how proud he was to have him go out and protect this country.

He felt as empty as his number in the win column.

Tight games or blowouts, Navy has made a habit of beating Army. Keenan Reynolds helped Navy top Army for the 11th straight time, scoring the winning touchdown late in the fourth quarter in a 17-13 victory in the 113th rivalry game Saturday.

The Midshipmen can hook an anchor to the Commander-in-Chief’s Trophy and bring it to Annapolis.

“I feel like we deserved that game in every way possible but it just didn’t happen,” Steelman said. “We were wearing them down and there was nothing that was going to stop us. But that’s life.”

Navy (8-4) and won the CIC trophy awarded to the team with the best record in games among the three service academies. Army and Navy each beat Air Force, putting the prestigious trophy up for grabs in the regular-season finale for the first time since 2005.

Unlike previous games over the last decade, the Black Knights were in this one until their final 70-yard drive. Army had driven to the 14 when Steelman and fullback Larry Dixon fumbled on a sloppy exchange. Navy recovered and the Midshipmen on the sideline went wild and rushed the field.

“We’ve talked about Trent’s career a lot,” Army coach Rich Ellerson said. “This is unfortunate because this doesn’t correlate with what he’s accomplished here. He deserves to feel better on the last day.”

Reynolds quickly found Brandon Turner down the sideline for a 49-yard gain. Reynolds, named the game’s MVP, then escaped a rush and followed with the 8-yard touchdown run with 4:41 left in the game.

The CIC trophy was coming back to the Naval Academy for a record 13th time after a two-year stint at Air Force. Before Navy started its 11-game winning streak, the longest one in the series, started in 1890, was only five games for either team.

“It means everything,” Niumatalolo said. “That’s our No. 1 goal, to get the Commander-in-Chief’s Trophy. I’m just so happy for these guys.”

The Midshipmen gathered at midfield and posed with the trophy while their classmates in the stands celebrated the win.

Niumatalolo sought out Steelman for some encouraging words.

“They don’t get any tougher than Trent Steelman,” he said. “I know everyone in our locker room has nothing but respect for that young man.”

Late in the third, Army’s James Kelly stripped the ball and linebacker Alex Meier recovered to give the Black Knights the ball at Navy’s 37. Eric Osteen kicked a 21-yard field goal 10 plays later for a 13-10 lead.

Navy made them pay on Reynolds’ score. The Midshipmen now lead the series 57-49-7

“It’s hard to do,” Niumatalolo said. “It’s hard to beat anybody in a rivalry game, but to do it that long just speaks volumes about the guys in the white jerseys.”

After a scoreless first quarter, Army and Navy swapped rushing TDs in the second. Navy fullback Noah Copeland plowed straight up the middle for a 12-yard score. Steelman matched him with an 11-yarder for his program-tying 17th TD run of the season, then saluted the cadets after the score.

Carlton Jones had 17 rushing touchdowns in 2004.

Then came the ugly – yet, so sweet – kick for Army that send the game into halftime tied at 10. Navy twice tried to freeze Osteen with consecutive timeouts. They didn’t work. There was a high snap, a line drive kick, a glance off the upright and – good! Osteen’s 41-yarder as time expired had the cadets rocking the Linc.

The fun wouldn’t last and it was just the latest loss for the Black Knights.

With cadets and midshipmen standing, bouncing and cheering on a gloomy day, it was clear how much the centuries-old rivalry means to both sides.

Biden handed off coin flipping duties to a referee before the game and made the traditional switch from the Navy side to the Army side at halftime. Team highlights were played to “Gonna Fly Now.” Billed as “America’s Game,” the hours before kickoff were highlighted by the Army Corps of Cadets and the Brigade of Midshipmen march onto the field. The cadet glee club performed the national anthem.

Cadets even brought one of those oversized goofy cutouts of Biden’s head to show off during the game.

There were reminders all around the Linc, full and with a festive vibe for a rare time this football season, that this was no ordinary game. Forget the kiss cam during timeouts. Purple Hearts and Distinguished Service Cross awards were presented.

The Midshipmen played with “Rafi” stickers on the back of their helmets as a salute to injured third-string quarterback Ralph Montalvo. Montalvo remained in a medically-induced coma after he was critically injured in a car accident near his home last on Thanksgiving night.

Montalvo was scheduled to travel to Philadelphia and dress for the Army-Navy game before the accident. The Naval Academy had shipped his game jersey to his parents and it will be waiting for him.