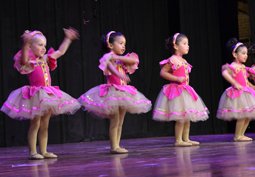 My video camera was charged and I was 15 minutes early for my 3-year old daughter’s first dance recital. As I milled outside the studio, I could see her practicing with the other students. I saw her execute her signature move: raising the roof. Her cheeks were flushed and her sweaty hair was already sticking to her temples.

She knew that I was going to come and watch her class perform the dances they had been learning. When I dropped her off at school, she gave me a kiss and said, “See you later, at my recital!”

When the teacher opened the door for the parents to come in, I scanned the room for my daughter. I spotted her lying face down on the ground, her head buried in her hands. The other parents were filling in around me, and Sadie was refusing to budge.

I approached her and put my hand on her back, and I felt her trembling.

“Sadie, are you OK?” I was worried that she was sick. She kept her hands glued to her face as I asked her a battery of questions. I determined she wasn’t sick; she was scared.

And Sadie is the very last child I would suspect would suffer from stage fright. She’s my child who thinks our coffee table is her personal stage. She’s the child most likely to yell to crowds of strangers, “Watch me!”

But not now. She was refusing to sit up or lift her head. When I asked her if she was scared, she nodded her head affirmatively, so I put my hand gently on her back and watched the other students perform. I quietly slipped the video camera back into my purse and let my daughter remain curled up in terror.

And, I had never been more proud of Sadie. It wasn’t a moment suited to a video montage, but I was beaming that my daughter knew she could say “no” when she needed to. As I patted her little back to the beat of Carly Rae Jepsen, I felt my heart bursting with joy that my little girl had learned how to respect her own limits. I didn’t learn I could say “no” until I was in my 20’s. And here she is, at 3, refusing to perform because she didn’t want to.

Here’s a little girl who has a powerful tool — she will be able to say “no” to anyone trying to force her to perform or move faster than she is capable or willing. Sadie’s “no” may protect her from date rape or crappy work assignments or command performances that I may ask of her before I realize the toll it might take on her.

After the applause died down and everyone was gone, Sadie sat up, her little face drenched in relief that it was over and that she didn’t have to do anything. Her teacher asked her if she wanted to do one routine just for me, and Sadie agreed. She danced her little heart out and raised that roof with all her might. An audience of one was all she could manage.

And I have never been prouder of her.