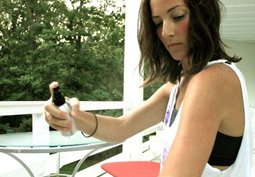 This summer you might need to find a new way to get rid of those itchy little pests! According to a recent study conducted on the effectiveness of insect repellents with Deet, mosquitoes become less sensitive to the chemical after being exposed to it.

First developed by the U.S. military soon after World War II, Deet is now one of the most widely used ingredients in insect repellants.

Mosquitoes are showing a higher level of tolerance, especially in those who have previously been exposed to the substance.

How will we survive July 4th without effective bug spray?

For now, Deet-based bug sprays should do the trick. These repellants are still considered to be the best option. But, as years pass, the effectiveness is expected to decrease as mosquitoes become more accustomed to the chemical.

Just keep in mind that the effectiveness wears off after around 3 hours, so be sure to re-apply regularly in order to minimize those annoying bites.

If you’ve never been a fan of the strong smell or greasy consistency, don’t worry, there are alternatives. Cutter Advanced offers deet-free repellant which has found to be effective without the intensity of Deet, instead using Picaridin.

A plant-based alternative, which has been approved by the Centers for Disease Control, is oil of lemon eucalyptus.  The CDC recommends taking action against mosquitoes during the summer months to protect yourself and loved ones against illness and infections spread by mosquitoes.

What are some other ways you’ve found to successfully repel mosquitoes?