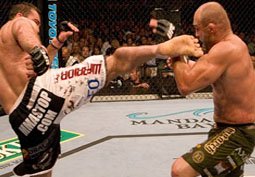 “I hate being medicated,” Marine Lieutenant Lee Stuckey says through a thick Alabama accent. “But without it, I can’t sleep right. I get night tremors, sweats, the works.” Stuckey’s situation is not uncommon among veterans returning from Iraq and Afghanistan. Post Traumatic Stress Disorder is an anxiety disorder that can develop after exposure to a terrifying event or ordeal, and it’s estimated to affect one in every eight veterans returning home from combat today. After two combat tours and a close encounter with an IED (improvised explosive device) outside Camp Fallujah, Stuckey’s been fortunate. He has all of his limbs, his eyesight, and no serious loss of motor skills.

But his return home brought a new set of challenges. Stuckey was placed in the medical platoon at Camp Lejuene, North Carolina, with his fellow PTSD Marines. Although designed for rehabilitation, the environment was depressing.

“Marines get frustrated with the traditional treatment of talking it out,” Stuckey says. “Guys would just go back to their barracks rooms and drink away their pain all night. It just wasn’t a good situation.”

An avid martial artist, Lieutenant Stuckey took it upon himself to drag a few Marines out of their lethargy and into Camp Lejuene’s Semper Fit gym. There they met Chilean immigrant Andrea Lucie, a fitness instructor who was exploring new ways of dealing with PTSD through a complex regimen of Yoga, meditation, and breathing techniques for rehabilitation. But it was her background in martial arts that really got their attention.

“A Muay Thai combination is hard for a patient suffering from traumatic brain injury,” she says, through an accent as daunting as Stuckey’s. “But it helps them focus because there are repetitive movements that they have to remember, and it’s a disciplined act. Marines are disciplined people, so they relate to it.”

Before long, Lucie was getting positive results. Despite not having a degree in psychology, she ended up designing her own plan, which revolved around the thing Marines know best: fighting. By combining exhaustive MMA workouts that tapped into their adrenaline with Yoga and meditation (for relaxation), Lucie found that her Marines were adjusting to their surroundings better and sleeping more restfully.

“Marines are more interested in physical challenges like MMA and traditional martial arts,” Lucie says. “They’d rather hit something than talk about how they feel.”

That makes sense, as young American men don’t join the US Marine Corps to sit behind a desk. They join to be fighters, and even when their bodies are broken or their minds are suffering, they want a way to reconnect with their warrior ethos. Mixed martial arts does that and more.

“MMA humbles Marines,” says Stuckey. “It shows them they don’t have to be aggressive, that it’s okay to admit when you’re suffering. Marines are a culture of not showing weakness, so instead of seeking help when they have PTSD, many Marines just act like nothing’s wrong.”

Lacking the money for a true medical study, Lucie presented her experiences to the Combat Operations Stress Control Conference in San Diego, and got a good reception from the brass there. But “attaboys” don’t fund research, so what she and her colleagues are seeking now is someone to support a formal study on the linkage between Yoga, MMA, and PTSD.

Lieutenant Stuckey doesn’t need a study. He just goes to sleep without a cocktail of medications. “If I have a hard MMA workout, I don’t have to take the meds, and I sleep better than ever. But if I miss a workout for some reason, then I still have to take them.” Sometimes it doesn’t take a shrink to figure out how the mind and body work.