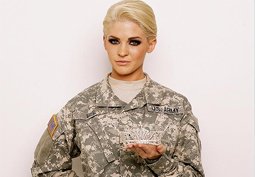 Miss Kansas Theresa Vail is making waves in this year’s Miss America Pageant. The U.S. Army Sergeant is the second military contestant to compete in the event won’t let long-standing taboos stand in her way. She will proudly expose her tattoos during the pageant in hopes of empowering women and overcoming stereotypes.

Our question: What can’t she do?!

Vail is an expert M16 marksman, boxer, skydiver, mechanic and a bow hunter. She’s also fluent in Chinese and recently re-enlisted with the hopes of eventually becoming an Army dentist, as her father was. Big acomplishments and big dreams don’t seem un-realistic for this all-star.

This determined 23-year old is conquering everything that comes her way. We wish the outdoorsy beauty queen the best of luck in the 2013 Miss America Pageant, airing on ABC Sunday, September 15th at 9pm EST.