MilSpouses Get Backup from Conference 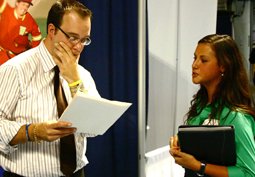 Stephanie Crosse figures her next move with her Army lawyer husband should open new career opportunities. She has a license to practice law in Georgia, and the Peach State is their next destination.

But Crosse knows she’ll have to battle a perception that military spouses are bound to be short-timers at any job. It’s one of the obstacles Army spouses face when they look for work.

“There’s still the bias of ‘You’re only going to be here a couple of years,’” she said.

Crosse, 38, joined about 300 military spouses at a conference Friday at the University of Washington Tacoma, where they met with corporate recruiters and shared advice about how to build a career in a mobile Army family.

The conference, sponsored by the Military Officers Association of America, aimed to give spouses a boost on their job searches. Participants received one-on-one résumé critiques and sat in on workshops.

“All they’re looking for is some mentor-ship and some networking,” said retired Navy Vice Adm. Norbert Ryan, president of the association.

They received a couple of pep talks, too, from Ryan and U.S. Sen. Patty Murray, who told the spouses they have plenty to brag about.

“Like your spouses, you are all used to the sacrifices and compromises that come with being a team player, you understand hard work and the day-to-day discipline it takes to succeed both at home and on the job, and importantly, you are resilient and resourceful in ways that I’m sure few other job candidates are,” said Murray, a Washington Democrat.

The event also was intended to advance a developing partnership between UWT and Joint Base Lewis-McChord. The college created a military spouse advisory committee, and it’s working on programs that could cater to Army families who are in the area for only a short time, said UWT spokesman Mike Wark.

For instance, a program might start in a Tacoma classroom but shift to an online setting over time. The idea would give students a chance to make personal connections in a classroom, but flexibility to finish in a different location.

A 2010 Defense Department survey estimated that military spouses who want to work have a 26 percent unemployment rate, far higher than their civilian peers.

The spouses face challenges in building local networks when they move and in transferring their work-related certificates from state to state.

“You feel like you are always starting over,” said Patti Brown, wife of Lewis-McChord senior Army officer Lt. Gen. Robert Brown. She is on the UWT’s advisory committee, and she’s working with other organizations to spur the hiring of military spouses.

Crosse is on the spouse advisory board for the Military Officers Association of America. Her husband serves at Fort Meade in Maryland, and she traveled to Tacoma for the conference.

She’s looking forward to finding a job that will allow her to practice law in Georgia. But she will miss her job in Maryland, where she and her husband “finally have friends.”

She said spending time with other networking military spouses at the conference left her “excited, knowing I’m not alone.”