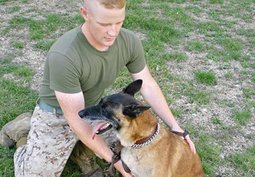 LACKLAND AIR FORCE BASE, Texas — Not long after a Belgian Malinois named Cora went off to war, she earned a reputation for sniffing out the buried bombs that were the enemy’s weapon of choice to kill or maim U.S. troops.

Cora could roam a hundred yards or more off her leash, detect an explosive and then lie down gently to signal danger. All she asked in return was a kind word or a biscuit, maybe a play session with a chew toy once the squad made it back to base.

“Cora always thought everything was a big game,” said Air Force Tech. Sgt. Garry Laub, who trained Cora before she deployed. “She knew her job. She was a very squared-away dog.”

But after months in Iraq and dozens of combat patrols, Cora changed. The transformation was not the result of one traumatic moment, but possibly the accumulation of stress and uncertainty brought on by the sharp sounds, high emotion and ever-present death in a war zone.

Cora — deemed a “push-button” dog, one without much need for supervision — became reluctant to leave her handler’s side. Loud noises startled her. The once amiable Cora growled frequently and picked fights with other military working dogs.

When Cora returned to the U.S. two years ago, there was not a term for the condition that had undercut her combat effectiveness and shattered her nerves. Now there is: canine post-traumatic stress disorder.

Veterinarians and senior dog handlers at Lackland have concluded that dogs, like humans, can require treatment for PTSD, including conditioning, retraining and possibly medication such as the anti-anxiety drug Xanax. Some dogs, like 5-year-old Cora, just need to be treated as honored combat veterans and allowed to lead less-stressful lives.

Walter Burghardt Jr., chief of behavioral medicine and military working-dog studies at Lackland, estimates that at least 10% of the hundreds of dogs sent to Iraq and Afghanistan to protect U.S. troops have developed canine PTSD.

Cora appears to have a mild case. Other dogs come home traumatized.

There are no official statistics, but Burghardt estimates that half of the dogs that return with PTSD or other behavioral hitches can be retrained for “useful employment” with the military or law enforcement, such as police departments, the Border Patrol or the Homeland Security Department.

The others dogs are retired and made eligible for adoption as family pets.

The decision to officially label the dogs’ condition as PTSD was made by a working group of dog trainers and other specialists at Lackland. In most cases, such labeling of animal behavior would be subjected to peer review and scrutiny in veterinary medical journals.

But Burghardt and others in the group decided that they could not wait for that kind of lengthy professional vetting — that a delay could endanger those who depend on the dogs.

Since the terrorist attacks of 2001, the military has added hundreds of canines and now has about 2,500 — Dutch and German shepherds, Belgian Malinois and Labrador retrievers — trained in bomb detection, guard duty or “controlled aggression” for patrolling.

Lackland trains dogs and dog handlers for all branches of the military. The huge base, located in San Antonio, has a $15-million veterinary hospital devoted to treating dogs working for the military or law enforcement, like a Border Patrol dog who lost a leg during a firefight between agents and a suspected drug smuggler.

“He’s doing fine, much better,” the handler yelled out when asked about the dog’s condition.

Cora received her initial training here and then additional training with Laub at Moody Air Force Base in Georgia. Before they could deploy, however, Laub was transferred to Arkansas, and Cora shipped off to Iraq with a different handler, much to Laub’s regret.