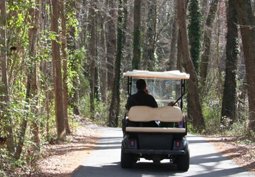 Daily Press
While on the job, members of the U.S. Coast Guard tend to stay busy patrolling the nation’s waterways, intercepting drug smugglers or maintaining port security.In their off hours, they can get creative.

The personnel at the Coast Guard Training Center in Yorktown are a case in point. Two years ago at the annual Coast Guard Holiday Party, the group ordered pizza and decided to stage a flash fund-raiser in order to give the delivery guy a giant tip. When the pizza came, they stunned the driver with a $500 tip for $56 worth of pizza.

Chief Petty Officer Ray Rehberg, who hosted that party, got an idea. What if they used their free time and applied that kind of enthusiasm to a larger cause? A few twists and turns later, the not-for-profit group GO CARTS was born.

The mission: Drive a solar-powered golf cart from the Coast Guard Training Center in Petaluma, Calif. to Yorktown in order to raise $50,000 for the Wounded Warrior Project. Rehberg came up with the golf cart idea. As a electrician’s mate chief, he works with batteries and engines, and it led him to Club Car, which bills itself as the world’s largest manufacturer of small-wheel, zero-emission electric vehicles.

The company donated a $13,000 golf cart for the cause, and the mission is a go. Aided by reservists and retirees, the Coast Guardsman are blocking out off-duty time so they can start in Petaluma on April 29 and arrive in Yorktown about one month later. Along the way, they’ll be touring the nation’s heartland at 25 mph, stopping at VA hospitals, Veterans of Foreign Wars posts and other places.

Want to help? Click on the GO CARTS website at www.cartingforacause.org to check out the route, find out more about the not-for-profit effort and make a contribution.

We’ll have more on the coasties’ land-loving tour closer to the start.

The Honor Flight Network operates around the country and has a single mission: Transport World War II veterans to Washington, D.C., so they can experience the National World War II Memorial. A chapter based here in the Historic Triangle has been responsible for taking hundreds of veterans in Hampton Roads on this important trip, free of charge.

The Daily Press has been fortunate enough to cover two such trips to Washington, and the veterans gave it rave reviews.