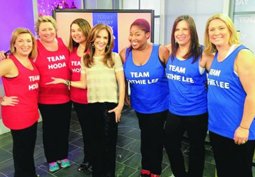 There’s nothing like dieting on national television to keep you honest. That’s all the motivation Jessica O’Zwoldike, a 24-year-old Marine wife from Yuma, needs.

But she’s also doing it for the “silent ranks” — fellow military wives.

“We are not the ones who carry the gun and dodge bullets, but we are a crucial part of the military,” she wrote on her “Silent Ranks Get Fit with Jessica O’Zwoldike and the Today show” Facebook page.

“We are the ones who have to be strong so our service members can focus on the task at hand and not have to worry about our well being back at home!”

NBC’s Today show chose the mother of two boys, ages 1 and 5, to take part of a 10-week health, fitness and weight loss challenge.

She will be featured with a few other women every Wednesday during co-hosts Hoda Kotb and Kathie Lee Gifford’s segments which air between 10 and 11 a.m.

She’s not too far from the New York City set. She now lives in Colts Neck, N.J., where her husband Stefan was recently assigned to recruiting duty. The pair met and married when he was stationed at Marine Corps Air Station Yuma,

She applied to participate on the show’s Facebook page after struggling to lose weight she gained through the birth of her kids and her husband’s deployments. A new mom and on her own, she found herself grabbing fast food and whatever was quick and easy, usually unhealthy choices.

Along with a lack of exercise, “it all adds up,” she noted. “I needed to lose weight.”

She was honored to be chosen and feels a responsibility to represent military families well. She knows her status as a military wife had something to do with her being picked for the challenge.

She got word while working at her job as a nursing assistant. “I went from excited to nervous to ‘what did I get myself into?’”

Her goal is to lose 50 pounds within a year and a total of 70 pounds “to be were I want to be, but I know it will take time. I keep telling myself I can do this,” O’Zwoldike said.

She won’t do it alone. She’s part of the three-member Team Hoda, which is going up against Team Kathie Lee. They are getting fitness advice and diet plans from author Joy Bauer, nutrition and weight-loss expert, and other show experts.

In the first of four phases she threw everything unhealthy out of her home – no sugar, no salt, no starchy vegetables.

And she’s learning plenty about nutrition, with some surprises. “What you think is right, isn’t always right,” she noted.

For example, frozen “healthy” dinners aren’t necessarily healthy. “The calories might be lower but the sodium is off the chart.”

She’s learned that small changes make a big difference. “You don’t have to go to the gym,” she said. “It can be something as simple as walking in place while you watch your favorite show every day.”

Her first on-screen weigh-in was last Wednesday. “Being on TV will keep me honest,” O’Zwoldike said.

On that show, the teams played a Family Feud-style quiz game in which they answered nutritional questions.

Team Kathie Lee won the first challenge, but the loss has only motivated Team Hoda to come back stronger this week. Tune in Wednesday to see how the team does.

Aside from the fitness challenge, O’Zwoldike is busy adjusting to life on the East Coast.

“It’s cold. It’s a big change for me,” she said, noting that the high that day last week was 17 degrees with a wind chill of below 2 degrees.

“I miss the sun, I miss the weather, I miss the warmth, I miss everything you take for granted, like the mountains,” O’Zwoldike said.

But most of all, the Yuma High School graduate said she’s missing her family and friends in Yuma.