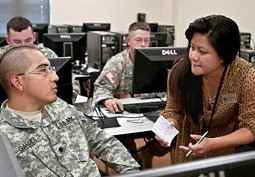 Nearly a month ago, when it was announced that the program would no longer be funded by the U.S. government, widespread frustration and disappointment began to spread. Outspoken distaste was seen through countless news reports, articles and petitions such as that found on change.org, which influenced the reversal of the decision.

As a program that began soon after World War 2 to stimulate enlistment, the standardization and funding of the TA program was established within the National Defense Authorization Act of 1972. Still a major reason for many soldiers to join the military, last year alone over 530,000 soldiers enrolled in over 850,000 courses through the program.

It’s uncertain when the benefits will once again become active. The Department of Defense is currently working to establish when and how the program will be restored. The reinstatement may also lead to a reduction in the money amount of assistance to each service member.

At the moment, the Tuition Assistance program is inactive and new applications are not being immediately considered.

What are your thoughts on the Tuition Assistance program?