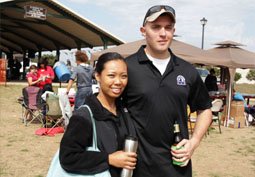 When couples, regardless of their gender, stand before each other in matrimony they recite vows along the lines of “for richer or for poorer and in sickness and in health.”

Harker Heights resident Karen Podhorn, 25, has taken this promise and solemn set of vows to another level.

While she was driving along Interstate 35 on Aug. 26, 2011, she got the call every military spouse dreads. Her husband, former Army Sgt. Paul Podhorn, had been shot. Just married a year at the time, the man she took to “love and to cherish until death do they part” might not make it.

“I forgot how to drive at that moment,” she said of how her mind completely went blank. “He knew what he was getting into when he joined the military, and even though deep down inside you know as a spouse what the possibilities are, you don’t think they are possible.”

If the bullet that passed through her husband’s head had taken a slightly different trajectory, by just a quarter of an inch in either direction, he wouldn’t be alive today.

Fortunately, his helmet slowed the bullet down and ever since that encounter with a sniper during his deployment with the 6th Squadron, 9th Cavalry Regiment, to Iraq, he has defied all the odds. Despite having to bathe and care for her wounded husband day in and day out during his recovery, her love for him never wavered — it only got stronger.

Military life isn’t for everyone, and after meeting Karen Podhorn and her husband during an Oktoberfest in their honor Oct. 27, I was able to see what true love and sacrifice looks like.

Whenever my husband deploys, I know there is a very real chance that he might not come back the same way I left him or that he might not make it back at all. I have found myself wondering if those scenarios ever shook out, how would I react? Would I step up to the plate or would I fall apart, overcome with anger and grief?

When I first met the Podhorns, I expected to be moved by his story, but what really resonated with me, being a military spouse myself, was her commitment to him through it all.

Divorce rates tend to be higher in the military because of the back-to-back deployments and stressors of military life, so to see a couple who has experienced such a roller coaster ride during their first year of marriage and be stronger today than they were when they first said “I do” is inspiring.

Karen Podhorn is one of the most selfless people I have met to date and she is truly an inspiration and a role model for other military spouses facing adversity and hard times.